Will This Brother’s War Aggro Deck Take The Lead?

Will This Brother’s War Aggro Deck Take The Lead? 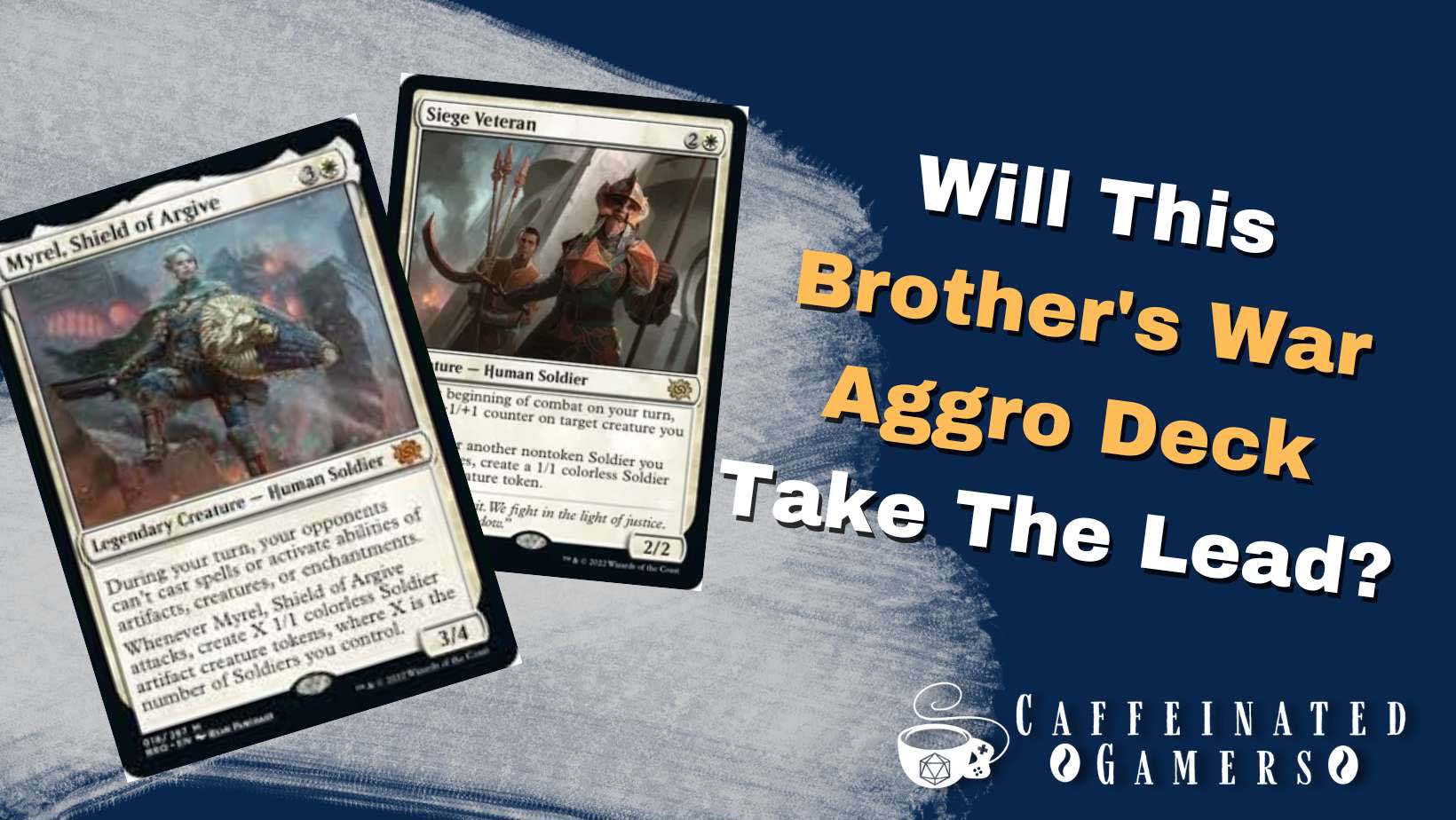 At the beginning of a new format, one of the biggest challenges a player faces is how to utilize the new cards in a set.  Some cards will have logical homes in existing decks while others will present more of a challenge.  Earlier this week, I put out a Top 10 cards from the Brothers’ War video.  Several of the cards had logical places in existing decks, while others needed a deck developed around them.  Two of these cards that need a deck built around them are Myrel, Shield of Argive, and Siege Veteran.

On their own, both cards offer powerful abilities that white players want in a format dominated by midrange decks that want to grind out wins.

The Brother’s War set has several themes that run throughout the set: giant artifact creatures, the brothers, and their allies, Phyrexians, and soldiers.  I am most interested in the soldier theme throughout the set because standard lacks a consistent, solid aggro deck.  The Brothers’ War set provides many options for the deck to go with those already in standard.

According to Gavin Verhey from Wizards of the Coast, set design envisioned soldiers as a blue white deck.  While soldier cards appear in other colors in the set, the best synergy between cards comes in blue and white.

My initial build of the deck is creature-heavy and land-light.  There are 39 creatures and only 21 lands.  The deck needs only three lands to cast all but two cards in the deck, so the light land count should help prevent you from flooding out.  There are eight one drops, twenty-one two drops, eight three drops, and two copies of Myrel, Shield of Argive.  With only two mana required to cast twenty-nine of the cards in the deck, I think the low mana count will not be an issue.  The key is getting at least one more soldier on the battlefield each turn.  Should the low mana count become a problem, you can add an additional Adarkar Waste or another land.

For a white mana, you get a 2/1 human soldier that can dig into your deck for a creature card with mana value 3 or less.  The ability costs three colorless and a white mana, but in the mid to late game when you have open mana and need to reload your hand this ability will keep you going.

Spectrum Sentinel costs one mana for a 1/2 soldier with protection from multicolored.

This ability should help it get in for consistent damage because many of the most played creatures in standard are multicolored.  In addition, Spectrum Sentinel is a life gain engine.  Whenever a nonbasic land enters the battlefield under an opponent’s control, you gain one life.  Most of the decks seeing play use only a few basic lands, so you should gain life consistently.

The two drop spots in the deck are filled with quality creatures that can quickly damage your opponent.  First is Dennick, Pious Apprentice.

For a white and a blue mana, you get a legendary 2/3 human soldier with lifelink.  Dennick sees play in a variety of decks because of its ability to stay in play and block small creatures.  He also prevents cards in graveyards for being the target or spells or abilities.  When he dies, then you can recast him from your graveyard for his disturb cost to get a 3/2 flyer.

Next comes Guardian of New Benalia.

Harbin, Vanguard Aviator is one of the most important cards in the deck.

For a white and blue mana, you get a legendary 3/2 human soldier with flying.  On its own these are good stats.  What makes him a potential all-star is his ability!  Whenever you attack with five or more soldiers, creatures you control get +1/+1 and gain flying until end of turn.  Playing Harbin into a board state that has five creatures you can attack with should not be difficult given the low mana cost of cards in the deck.  I can envision turns that you already have five soldiers in play then you cast Harbin and attack ending the game.  Many decks do not have a way to deal with flyers, so activating Harbin’s ability once should put you in a place where you can win the game with the first or second attack you make with Harbin in play.

Next, we have Resolute Reinforcements.  For a colorless and a white mana, you get a 1/1 human soldier that creates a 1/1 white soldier token when it enters play.  Getting two bodies for the price of one helps push your deck’s game plan of overwhelming your opponent with sheer numbers.

Thalia, Guardian of Thraben has been a staple card in standard since her printing in Innistrad: Crimson Vow.  Her ability to tax an opponent’s non-creature spells slows down other decks and tends to make your opponent want to kill Thalia so that they do not have to pay the tax.

Each three-drop offers an important ability for the deck.  Brutal Cathar exiles a creature your opponent controls when it enters the battlefield or transforms into Brutal Cathar.

Exiling Sheoldred or another good creature your opponent controls could change the outcome of the game, if you can attack for lethal while that creature is exiled.

Siege Veteran is Luminarch Aspirant for one more mana.

Luminarch Aspirant played a key role in standard for two years.  Siege Veteran has the same potential.  On your combat step, you get to give a creature a +1/+1 counter.  The ability to grow your team is big given the number of midrange decks in standard.  This will allow you to compete with any deck no matter its power level.  This ability alone would make Siege Veteran an auto-include in Azorius Soldiers.  Siege Veteran’s second ability makes it one of the best cards in standard.  When another nontoken soldier dies you get to replace it with a 1/1 colorless artifact creature token.  This ability will allow you to swing into opponents that have a decent board presence because your creatures will replace themselves with Siege Veteran’s ability.

The final creature in the deck is Myrel, Shield of Argive.  Myrel was one of my Top 10 picks for standard from The Brothers’ War set.  She cost four total mana, but the ability to prevent your opponent from interacting with the board on your turn easily is worth the four mana cost.  Then, when Myrel attacks you get to creature a 1/1 colorless artifact creature token for each soldier you control.

The sideboard focuses on removal.  My initial build of Azorius Soldiers does not have removal in the main deck outside of Brutal Cathar.  The goal of game one is to get a large number of soldiers on the field and overwhelm slower decks by turn five or six.

Then you can switch to a removal plan based on what your opponent is playing.  You have access to three removal spells: Lay Down Arms, Destroy Evil, and Fateful Absence.  If you need to destroy an artifact or enchantment you have Cathar Commando.  If you need to remove cards from a graveyard you have Sungold Sentinel to exile a card from a graveyard when it comes into play and when it attacks.  Finally, you have Skystrike Officer to fly over opponent’s battlefield to get in damage against decks that have a lot of creatures on their side.  Skystrike Officer might need to be in the main deck because when it attacks you create a 1/1 artifact soldier token.

I think this version should do well early in The Brothers’ War standard season.  Many decks will be looking for ways to include new cards and it will take several weeks for the format to shake out.  Once it does, changes will be needed for Azorius Soldiers.  I anticipate adding removal spells to the main deck and reducing the number of creatures for these spots in the main deck.  What other decks do will determine which removal spells will make need adding to ensure the deck’s success.  I can even envision a place where the deck has counter spells to prevent your opponent from playing his/her key card.