Will Elf Decks Break Out?

Will Elf Decks Break Out? 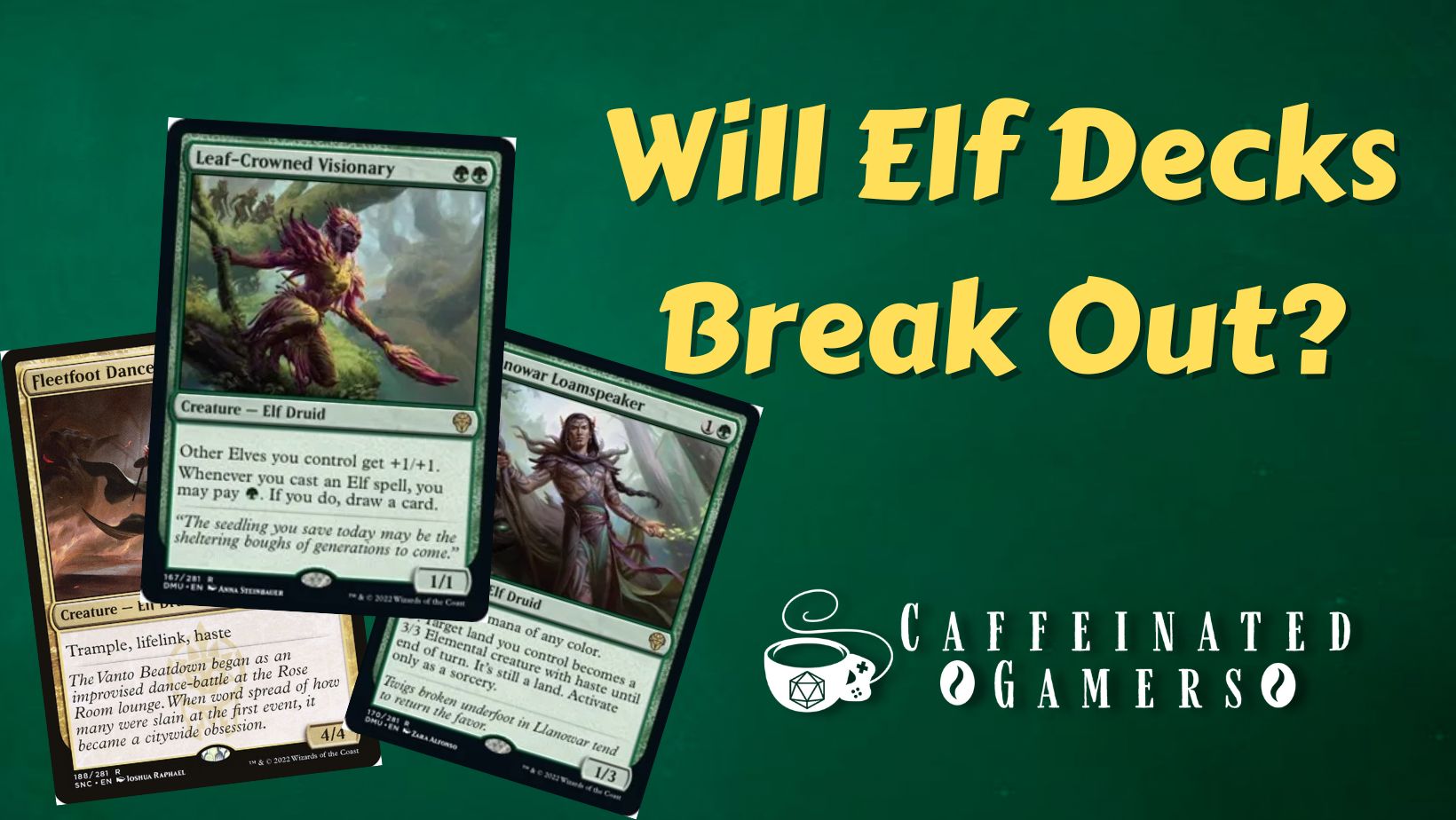 When Dominaria United was released, there was a lot of excitement about the lords from the set.  A lord gives +1/+1 to creatures of a specific type.  Clerics, elves, goblins, soldiers, and Merfolk tribes received lords and with King Darien XLVIII all creatures receive a +1/+1 boost.  Unfortunately, a consistent deck has not developed around any of them yet.  There are a few best-of-1 versions that see play on Arena, but a deck has not broken through in best-of-3 play.  With The Brothers’ War around the corner.

For two green mana, you get a 1/1 elf druid that gives other elves +1/+1 and whenever you cast an elf spell, you may pay a green mana to draw a card.  Currently, there are twenty-five elves legal in standard from previous sets.  Among them seeing play are Deathbloom Gardner, Fleetfoot Dancer, Gala Greeters, Jinnie Fay, Jetmire’s Second, Llanowar Loamspeaker, Queen Allenal of Ruadach, Radha, Coalition Warlord, and Yavimaya Iconoclast.  Some of these creatures synergize well with each other while others do not.  Typically, elf tribal rarely moves outside of green, but this version most likely will need to dip into red and white or at least one of them to maximize the value in the deck.  Getting a druid lord might push the deck over the top because most of the cards listed above are elf druids.

Goblin decks see play in nearly every format.  The newest goblin lord is Rundvelt Hordemaster.  This two mana goblin warrior gives other goblins +1/+1.  Whenever Rundvelt Hordemaster or another Goblin you control dies, exile the top card of your library. If it’s a Goblin creature card, you may cast that card until the end of your next turn.  There are fourteen goblins in current standard, but they are not good enough as a group to form a competitive deck.

Another beloved tribe is merfolk.  Vodalian Hexcatcher costs a colorless and a blue mana for a 1/1 merfolk wizard that gives other merfolk +1/+1 and you may sacrifice a merfolk to counter a target noncreature spell unless its controller pays one additional mana.

Only six merfolk currently have cards in standard, so making a working merfolk deck will have to wait until we get more merfolk to use.  This might not happen until we return to Ixalan.

Clerics are a tribe supported in Standard.  Twenty-one clerics currently are in standard.  Shadow-Rite Priest costs two mana for a 2/2 human cleric that gives other clerics +1/+1 and for five mana you can sacrifice a cleric to search your deck for a black creature card.

There is a cleric deck currently seeing some play in standard that has seen success in best of one on Arena.  The decks goal is to gain life with Lunarch Veteran and Elas Il-Kor, Sadistic Pilgrim when you play a creature.  This allows Voice of the Blessed grow and Markov Purifier to have the ability to draw a card for two mana on your end step.   As Voice of the Blessed grows it will gain flying and vigilance when it has four or more +1/+1 counters then when it reaches ten or more +1/+1 counters it gains indestructible.  Usually when Voice of the Blessed gains flying it is only a matter of time before it wins the game unless it is removed.  The Brothers’ War should provide a few more clerics, so the deck should get better soon.

Soldier tribal has good support in standard, but a competitive soldier deck has not developed.  With the arrival of The Brothers’ War set, the options for the deck will grow.  Valiant Veteran is the lord of the soldiers’ deck.  For a colorless and a white mana, you get a 2/2 kor soldier who gives other soldiers you control +1/+1 and after Valiant Veteran dies you can exile him from your graveyard for five mana to put a +1/+1 counter on each soldier you control.

A competitive version of soldiers has not been developed yet because it is unclear what direction the decks build should go.  One possibility is to use all the soldiers available in standard, but this version is underwhelming.  Another option is to create a soldier token deck, but the creature cards that create tokens have conditions that sometimes are hard to meet.

For a white mana, you get a 2/1 human soldier that can for four mana allow you to look at the top four cards of your deck and select a creature card that costs three mana or less that you get to put in your hand.  This is a fantastic ability to use in the mid- to late game when you are in top deck mode because it usually will give you access to a creature to continue building your board each turn.  Hopefully, we will get another one drop soldier to make the deck functional.

Finally, King Darien XLVIII gives other creatures you control +1/+1.  For a colorless, a green, and a white mana, you get a 2/3 human soldier.

For five mana, you can put a +1/+1 counter on King Darien XLVIII and create a 1/1 white solider token.  The overall high cost of this ability makes it generally unusable.  You can sacrifice King Darien to give all your token creatures hexproof and indestructible until the end of the turn.  Darien’s abilities push him towards a token deck which makes him less valuable in other decks.  We will have to see if King Darien XLVIII finds a good home once we get The Brothers’ War.