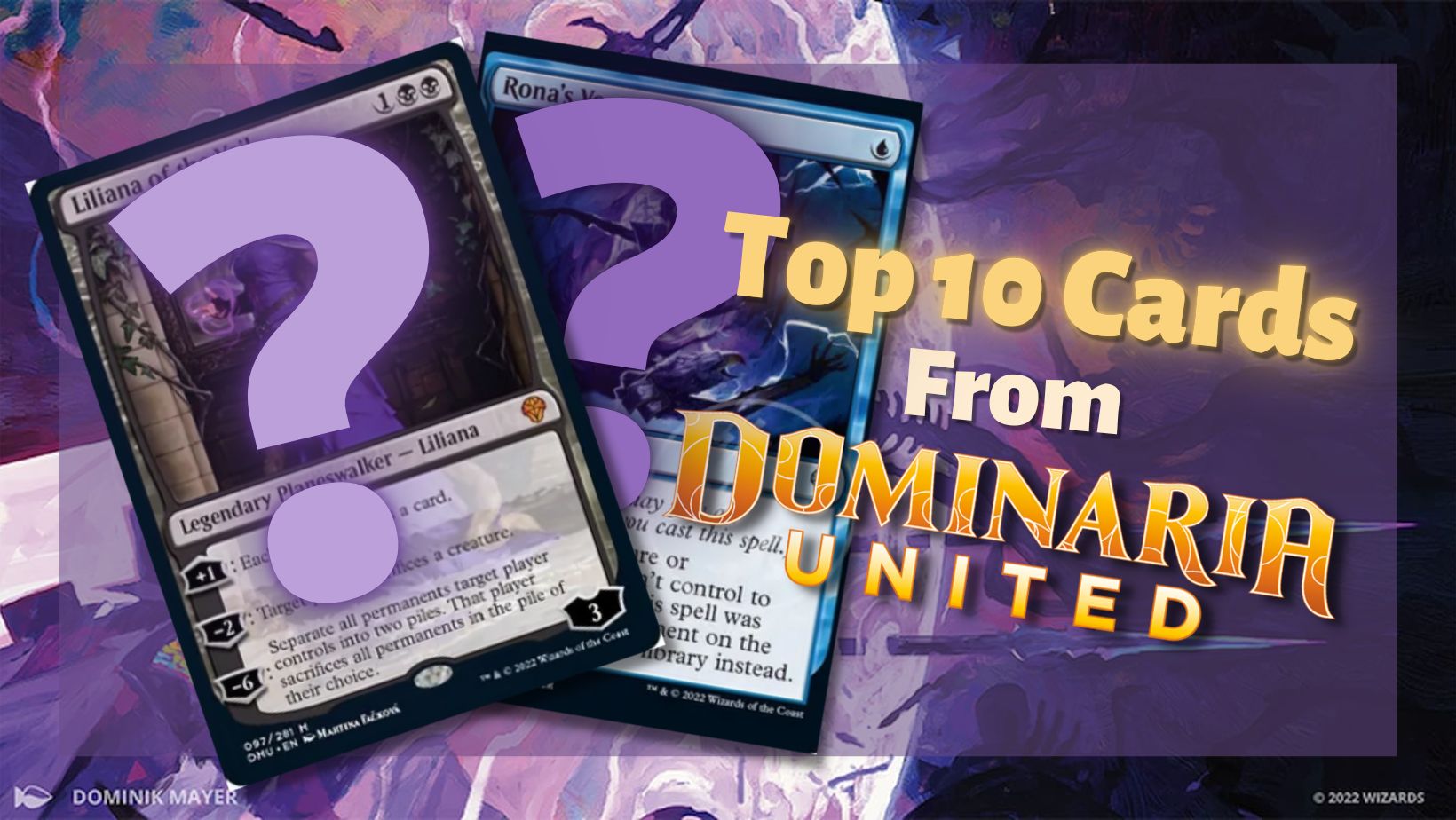 Now that we have seen all of the cards from Dominaria United, it is time for a look at the Top 10 cards from the set that I feel will have the greatest impact on standard.

My number 10 pick is King Darien XLVIII.  For a colorless, a green, and a white mana you get a 2/3 legendary human soldier with other creatures you control get +1/+1.  Plus for five mana you can put a +1/+1 counter on King Darien and create a 1/1 white soldier creature token, so late in games when you have extra unused mana you can activate King Darien’s ability and continue to build your board.  King Darien has a third ability that allows you to sacrifice King Darien to give your tokens hexproof and indestructible until the end of turn.  This plays well against board wipes and other affects that could remove all of your tokens from play.  I expect that we will quickly see a “soldiers” deck develop around King Darien XLVIII and Valiant Veteran that should be a good deck to play.

My number nine pick is Quirion Beastcaller.  For two mana you get a 2/2 Dryad Warrior with the ability to get a +1/+1 counter each time you cast a creature spell.  Then when Quirion Beastcall

er dies, you get to distribute any number of the counters on it to other creatures you control.  While not quite the ability of Luminarch Aspirant to put a counter on a target creature at the beginning of each combat step, it should grow quickly into a large creature in Mono Green Stompy or any other deck that has many creatures.

At number seven is Rona’s Vortex.  This one blue mana instant returns a target creature or planeswalker you don’t control to its owner’s hand or if it is kicked for two colorless and a black mana the permanent goes to the bottom of its owner’s library instead.  The ability makes it nearly impossible for a player to get the card back and four mana is not a lot of mana to remove your opponent’s best threat.  Rona’s Vortex will see play in Esper and Dimir decks and has the change to see play in any deck that has access to both blue and black mana.

Coming in at number six is Haughty Djinn.  For three mana you get a Djinn with flying that has power equal to the number of instant and sorcery cards in your graveyard.  Plus Haughty Djinn reduces the cost of your instant and sorcery spells by one colorless mana.  We have seen similar cards play a major role in Izzet spell decks and Mono Blue Tempo decks over the years.  Haughty Djinn will be no exception.  With the other cards, we have in standard a nice Izzet Spells or Mono Blue Tempo deck has a real chance to not only see play but be a contender for one of the best decks in Dominaria United Standard Season.

Number four is Liliana of the Veil.  For anyone who has played Magic for an extended period, Liliana of the Veil has been a staple card from her original printing in standard to modern.  This printing return’s Liliana to standard and for the first time she will be pioneer legal.  The card is powerful because as early as turn three you get to have your opponent sacrifice a creature or discard a card.  Continually activating her +1 ability to have each player discard a card will quickly reduce the options your opponent has to choice from in his/her hand and will lead your opponent to only having the ability to play the card he/she draws each turn.  Then once you get Liliana to six loyalty, you can activate her ultimate ability.  You get to separate your opponent’s cards in play into two pile and your opponent gets to keep one of the piles.  This in many ways is worse than a board wipe because your opponent can lose land cards and well as other permanents.  Expect Esper, Orzhov, Rakdos, Dimir, and Mono Black decks to play Liliana and because she is a reprint expect older players to dust off their old copies of the card for week one of Dominaria United Standard Season.

The number three card is Jaya, Fiery Negotiator.  This four mana planeswalker has four loyalty abilities that make it one of the best red planeswalkers, not only in standard, but in other formats.  Jaya +1 ability creates a 1/1 red Monk creature token with prowess.  This not only protects Jaya, but has the ability to grow each turn as you cast non-creature spells.  Next for -1 you get to exile the top two cards of your library.  Then you get to choose one of them to play this turn.  For -2, you can target an opponent’s creature and deal damage to it equal to the number of attacking creatures you control. Finally, for -8 you get an emblem with “Whenever you cast a red instant or sorcery spell, copy it twice.  You may choose new targets for the copies.”  When you get the Jaya emblem, a Play with Fire turns into a one mana deal six damage spell and Lightning Strike into a two mana deal nine damage spell.  Over the past season, I have played some with Chandra, Dressed to Kill and I did not have difficulty getting to her emblem, so I think we will see the same from Jaya, Fiery Negotiator.

Jaya fits well into a spell slinger style Izzet deck that uses the available cheap blue and red spells to quickly draw through your deck and deal damage to your opponent along the way.  She also might find a home in a Mono Red deck if one develops.

The number two card is Defiler of Vigor.  This 5 mana green, 6/6, Phyrexian Wurm with Trample by far is the best of the defiler cycle of cards from the set.  First, you get to reduce the cost of any green permanent you cast by one green mana by paying 2 life.  This will help you fill the board quickly with creatures after Defiler of Vigor enters the battlefield.  On top of that, you put a +1/+1 counter on each creature you control whenever you cast a green permanent spell.  This will quickly grow your creatures to a point where only a board wipe or direct removal will get creatures off the battlefield.  Mono Green looks like a strong deck after rotation and Defiler of Vigor fits in nicely as the top end of the deck curve.

The number 1 card from Dominaria United is Serra Paragon.  For two colorless and two white mana you get a 3/4 Angel with Flying and an ability similar to Lurrus of the Dream-Den.  “Once during each of your turns, you may play a land from your graveyard or cast a permanent spell with mana value 3 or less from your graveyard.”  This ability looks even better than Lurrus’ because you do not have the deck building restrictions and you get to bring back land from the graveyard.  Streets of New Capenna has a land cycle that sacrifices itself when it enters the battlefield and you get to search your library for a basic land of any of three types.  On top of this ramping ability, you can cast any one, two, or three drops from your graveyard to bring it back onto the battlefield.  While there is a lot of exile in standard, just having the chance to replace your dead creatures, planeswalkers, and any other permanent offers significant value that can’t be underestimated.  Expect deck builders to work to exploit Serra Paragon’s abilities.  We could see her in a variety of decks as the top-end of the curve creature.  Mono White, Esper, Orzhov, and even Boros decks look like a good fit for Serra Paragon.

Feel free to put your favorite cards in the comments below and if you would like to get a closer look at all of the cards from Dominaria United that have a chance to see play during Dominaria United Standard Season check out the 8-video playlist below.