The Rise of the Gruul Werewolves Aggro Deck

The Rise of the Gruul Werewolves Aggro Deck 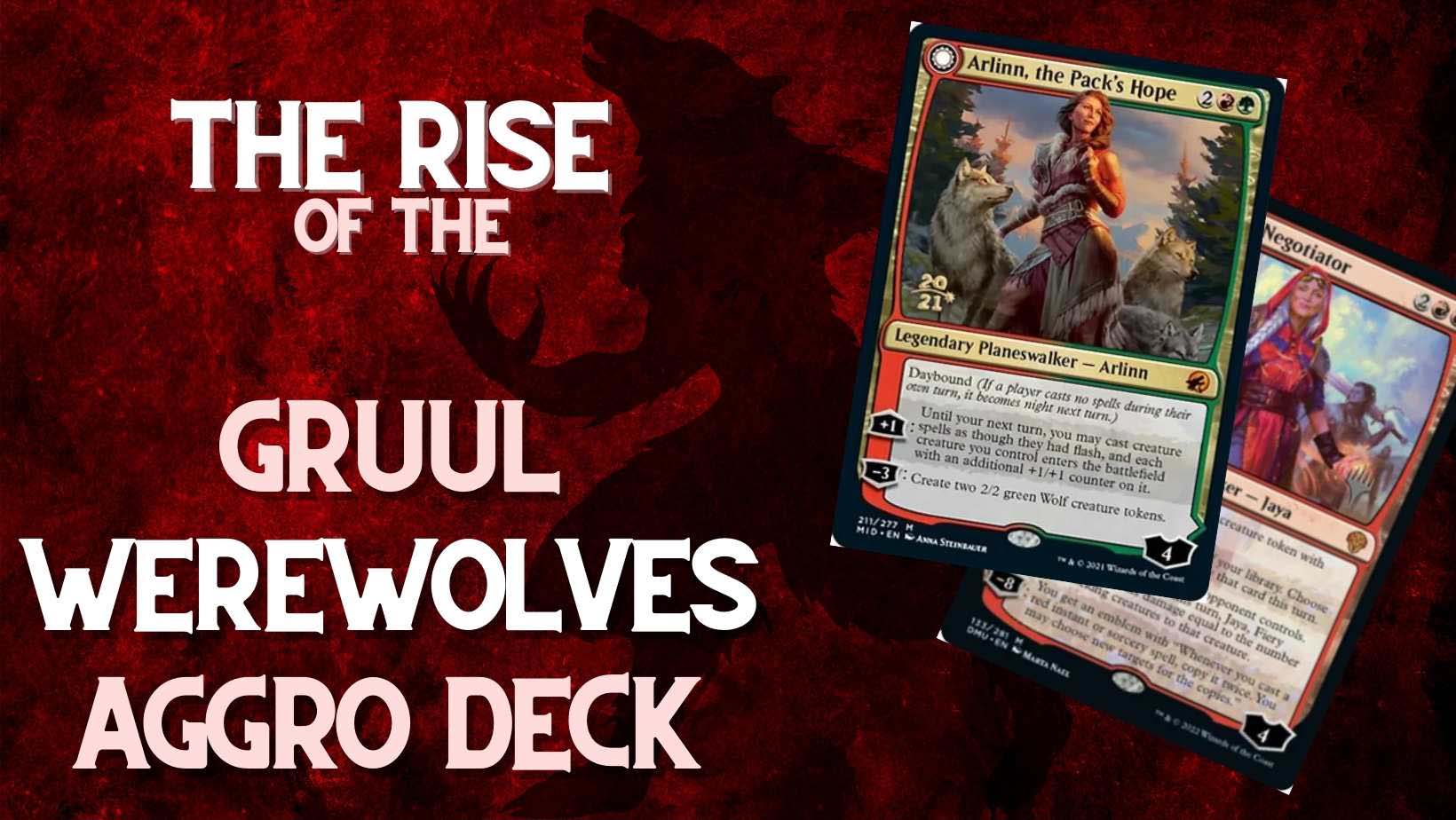 The BIG NEWS of the week is the banning of The Meathook Massacre.  The ban went into effect on October 10, 2022, in paper and on October 13, 2022 in Arena.  This should have a positive effect on the overall metagame.

The good news about the banning is that there is no clear replacement for The Meathook Massacre in Mono-Black while the two- and three-color decks have better options in their other colors.

The feel-bad effect of having The Meathook Massacre resolved against you has punished aggro decks for over a year.  Now that it is gone, aggro has an opening to find a place in the metagame.

This week’s article will look at Gruul Werewolves an aggro deck having success on MTG Arena in best-of-three matches.  The problem faced by Aggro decks is the value that Midrange decks have currently in standard.  It is not uncommon for Midrange decks to have a slow start, but by the time you reach the mid-game the value train that Midrange decks are on takes over the game and limits the ability of Aggro decks to go underneath or over your opponent’s creatures to deal the last few points of damage to win the game.

Why is this important?  The goal of an aggro deck is to finish the game before your opponent can get their game plan going.  This works best when you are on the play for game one because it guarantees that you will go first twice if you go to a third game.

Based on the data from untap.gg this is the most successful version of Gruul Werewolves, and this comes from data from before the banning of the Meathook Massacre.

Below is the deck.

Gruul Werewolves relies on two and three-drop creatures to create a critical mass of threats to overwhelm an opponent.

The deck’s creatures start with one drop Ascendant Packleader.  For a green mana, you get a 2/1 wolf that gets a +1/+1 counter each time you cast a spell that cost four mana or more.  And that gets a +1/+1 counter if a four-mana or great permanent is in play when it enters the battlefield.  One of the problems that one and two mana creatures face is their inability to attack through an opponent’s creatures in the mid to late games.  These abilities make Ascendant Packleader a good draw in your opening hand or in the late game with four mana permanents on the field and/or in your hand.

Kessig Naturalist, Yavimaya Iconoclast, and Outland Liberator are the two drops in the deck.

Kessig Naturalist is the preferred creature to cast on turn two.

Naturalist costs a green and a red mana for a 2/2 human werewolf.  Both Kessig Naturalist and Outland Liberator have the day-night mechanic. During day Kessig Naturalist creates a green or red mana when it attacks.  This is important to the deck because it helps cast spells early.  Then during night, Lord of the Ulvenwald gives other wolves and werewolves you control +1/+1.  Most of the creatures in the deck are wolves or werewolves, so this boosted your team and helps push damage to finish the game.

Yavimaya Iconoclast gives the deck a 3/2 elf with trample that has kicker of one red mana.

When kicked it gets +1/+1 and haste until the end of the turn.  Typically, you will want to cast Yavimaya Iconoclast when you can kick it, but when necessary, playing it on turn two gives you an effective blocker that can effectively deal damage.

Outland Liberator is a 2/2 human werewolf that can sacrifice itself to destroy an artifact or enchantment.

With the arrival of The Brother’s War set next month, Liberator’s ability will play more of a role in matches.  During night, Outland Liberator transforms into Frenzied Trapbreaker.  This 3/3 werewolf retains the ability to sacrifice itself to destroy an artifact or enchantment and when it attacks it gets to destroy a target artifact or enchantment defending player controls.  This ability can effectivity eliminate a Wedding Announcement or Reckoner Bankbuster.

Reckless Stormseeker is a 2/3 human werewolf that at the beginning of your combat step gets to give a creature you control +1/+0 and haste until the end of the turn.  This allows Reckless Stormseeker to attack the turn it enters play.  Then it can give another creature the ability on later turns to allow a creature you cast that turn to attack.  When day turns to night it becomes Storm-Charged Slasher a 3/4 werewolf.  Then at the beginning of combat on your turn, target creature you control gets +2/+0 and gains both trample and haste until the end of the turn.  This can turn any creature you control into a lethal threat when combined with other creatures and planeswalkers in the deck.

Squee, Dubious Monarch is a 2/2 goblin noble with haste.

Squee’s ability makes him a value engine for the deck.  Whenever Squee attacks, you create a 1/1 red goblin creature token that’s tapped and attacking.  This is like Adeline, Resplendent Cathar’s ability to creature a human token each time you attack.  Growing your forces each time Squee attacks helps build up to lethal damage early in the game.

Tovolar, Dire Overlord is the draw engine for the deck.  For a red, a green, and a colorless mana, you get a 3/3 human werewolf.

It has two important abilities that drive the power level of the deck.  First, whenever a wolf or a werewolf you control deals combat damage to a player, you get to draw a card.  Second, at the beginning of your upkeep, if you control three or more wolves and/or werewolves, it becomes night.  This allows you to transform any number of human werewolves you control.  Each of the day-night cards discussed offers a better version of the card during night.  Having the ability to ignore the daybound requirement that turns it too night prevents you from having to take a turn off from casting spells to turn it to nighttime.  Like other day/night creatures discussed above, Tolovar, the Midnight Scourge retains its ability that lets you draw a card when a wolf or werewolve deals combat damage to a player.  Plus, you can pay X mana, a red, and a green mana to give a target wolf or werewolf +x/+0 and trample until the end of the turn.  This allows you to give a blocked creature these abilities when you need to push additional damage to end the game or get close enough to make an opponent concede.

Thundering Raiju is one of my favorite cards from Kamigawa: Neon Dynasty.

The creature package for the deck offers powerful threats with abilities that can quickly overwhelm an opponent that has a slow start or one that does not have the defenses needed to stop the on slot of Gruul Werewolves.

Two planeswalkers supporting the werewolves in the deck: Arlinn, The Pack’s Hope and Jaya, Fiery Negotiator.