The Future of the Jeskai Hinata Deck in Standard

The Future of the Jeskai Hinata Deck in Standard 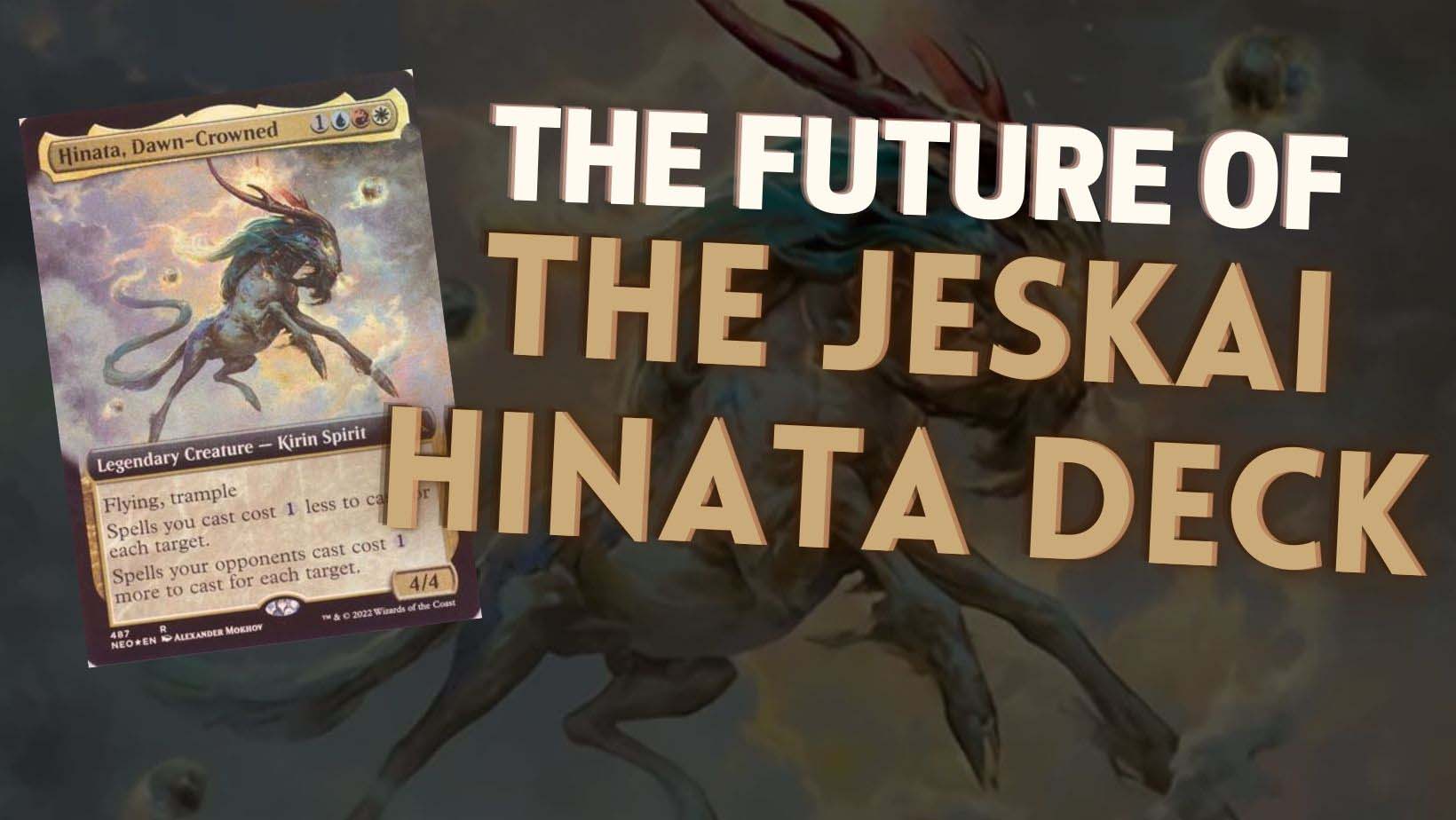 Hello everyone.  Welcome to Standard Weekly!

To start. here is a look at the deck’s most successful version according to stats on untapped.gg. 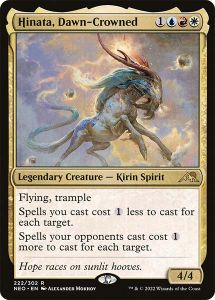 Few cards have the power potential of Hinata, Dawn-Crowned to take over a game.  This 4/4 with flying gives reasonable stats with a big upside in Hinata’s abilities.  For each target that your spell has, the cost of casting the spell is reduced by one mana.  For each target an opponent’s spell has the cost increases by one mana to tax many spells your opponent utilizes.  This allows the deck to use one of the most powerful instants in standard, Magma Opus. 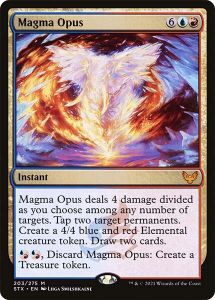 When you cast Magma Opus under normal circumstances, it costs a total of eight mana, but Hinata’s ability significantly reduces the cost.

Magma Opus deals 4 damage divided among any number of targets.  It taps two target permanents, creates a 4/4 blue and red elemental creature token, and it draws two cards.  Given Magma Opus’ ability to select up to six targets this means that you can reduce the cost of Magma Opus to as little as a red and blue mana. 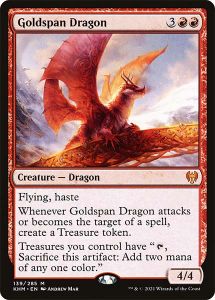 Goldspan Dragon is the deck’s biggest threat.  This five mana, 4/4 flying dragon with haste can quickly turn a game in your favor.  When Goldspan Dragon attacks or becomes the target of a spell its controller creates a treasure token.  In addition, Goldspan’s other ability allows you to create two mana of a single color when you sacrifice a treasure token.  This allows you to create a large amount of mana to cast Magma Opus or other large spells. 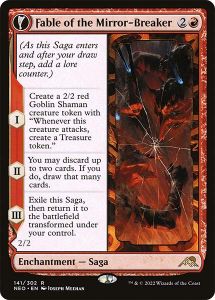 The next piece of the deck is Fable of the Mirror Breaker.  For three mana, you get a saga that on chapter one creates a 2/2 goblin token that creates a treasure token when it attacks.  Chapter two allows you to discard up to two cards and draw that many cards.  This helps you by getting rid of unneeded cards and helps you filter through your deck to get the best cards for a particular matchup.  Chapter 3 exiles Fable and returns it to the field as Reflection of Kiki-Jiki, a 2/2 creature that can copy a non-legendary creature. 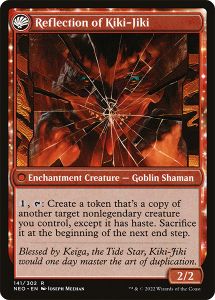 Typically, you want to copy a Goldspan Dragon if you have one in play.  Another option when you have two copies of Reflection of Kiki-Jiki in play is to copy it on your opponent’s end step and to use the copies to copy Reflection until you run out of mana.  This will leave the tokens in play for your turn.  Then you can attack with all of them to finish off an opponent.

The version I play uses a few different cards based on the local metagame.

An important card to the version I play is March of Swirling Mist. 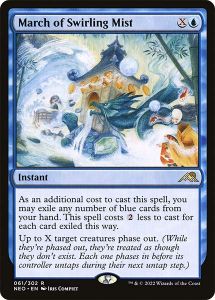 This instant allows you to phase out any number of creatures for a blue mana, and one for each creature you phase out.  This serves two purposes.

First, you can protect your creatures from removal spells by phasing them out after your opponent casts a spell that targets a creature or from an ability like The Wandering Emperor’s ability to exile a tapped creature.  The second use is to phase out your opponent’s creature on their turn, so your opponent loses the ability to attack with them and remove them as blockers on your turn.

With Hinata in play, March of Swirling Mist becomes a one blue mana spell because each time you target a creature the cost of the spell is reduced by one.  This has the effect of Time Walking your opponent, taking away your opponent’s turn, many times, and can prevent your opponent from the final attack they need to end the game.  March survives rotation, so it should be part of any Hinata deck.

The rest of the deck is a combination of draw spells, removal spells, and counterspells.  Expressive Iteration is one of the best draw spells in Magic’s history. 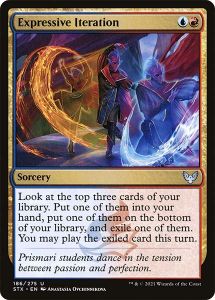 You get to look at the top three cards of your library, put one in your hand, one on the bottom of your library, and one in exile.  You can play the card from exile that turn.  Typically, the card exiled is a land that you will play as your land this turn.  When you play Expressive late in the game you can put a spell you will play that turn into exile.  Since Expressive Iteration leaves standard with rotation the deck will need to find an alternative if it successfully survives rotation.

In addition to the removal that Magma Opus can provide, Dragon’s Fire, Flame-Blessed Bolt, Valorous Stance, and Volt Surge allow you to remove your opponent’s creatures from the game.

Flame-Blessed Bolt has shifted between the main deck and the sideboard during Streets of New Capenna season because of the increasing size of creatures.  You will want Flame-Blessed Bolt in matches where your opponent has Tenacious Underdog because it exiles Underdog when it removes it.  This takes away your opponent’s ability to use Tenacious Underdog’s ability to use blitz to return to play. 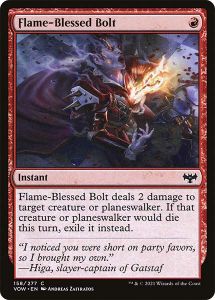 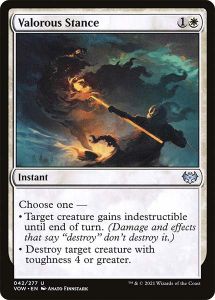 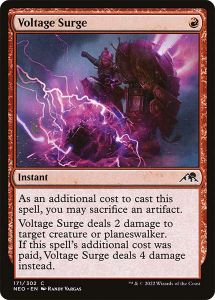 The last component in the deck is Reckoner Bankbuster. 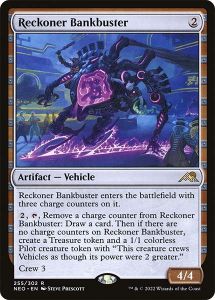 You can pay two mana and add a charge token to draw a card.  Reckoner Bankbuster is a vehicle that can be crewed for three to become a 4/4 creature.  After activating the draw ability three times, Bankbuster creates a 1/1 pilot token that can crew Reckoner Bankbuster.  This recent addition to the deck gives Jeskai Hinata more of a potential threat with the added benefit of card draw.

Post rotation the deck will need a full makeover.  The loss of Goldspan Dragon and Magma Opus takes away two of the big reasons for the deck’s success.  No clear replacements currently exist in standard, so the deck may need new direction post rotation.  There are possible replacements for Jwari Disruption and Dragon’s Fire, but the deck will need to add lands since modal double-faced land cards from Zendikar Rising and Kaldheim will no longer be part of standard.  The deck will need to add at least two land and possibly more to remain effective.

My expectation is that Jeskai Hinata will fall out of favor during Dominaria United season and possibly longer unless it gets new cards that effectively replace those rotating.

Next week’s article will explore one of the newer decks to find success in standard, Boros Aggro.

Until next time, good luck battling in person or on Arena.