The Future of Planeswalkers

The Future of Planeswalkers 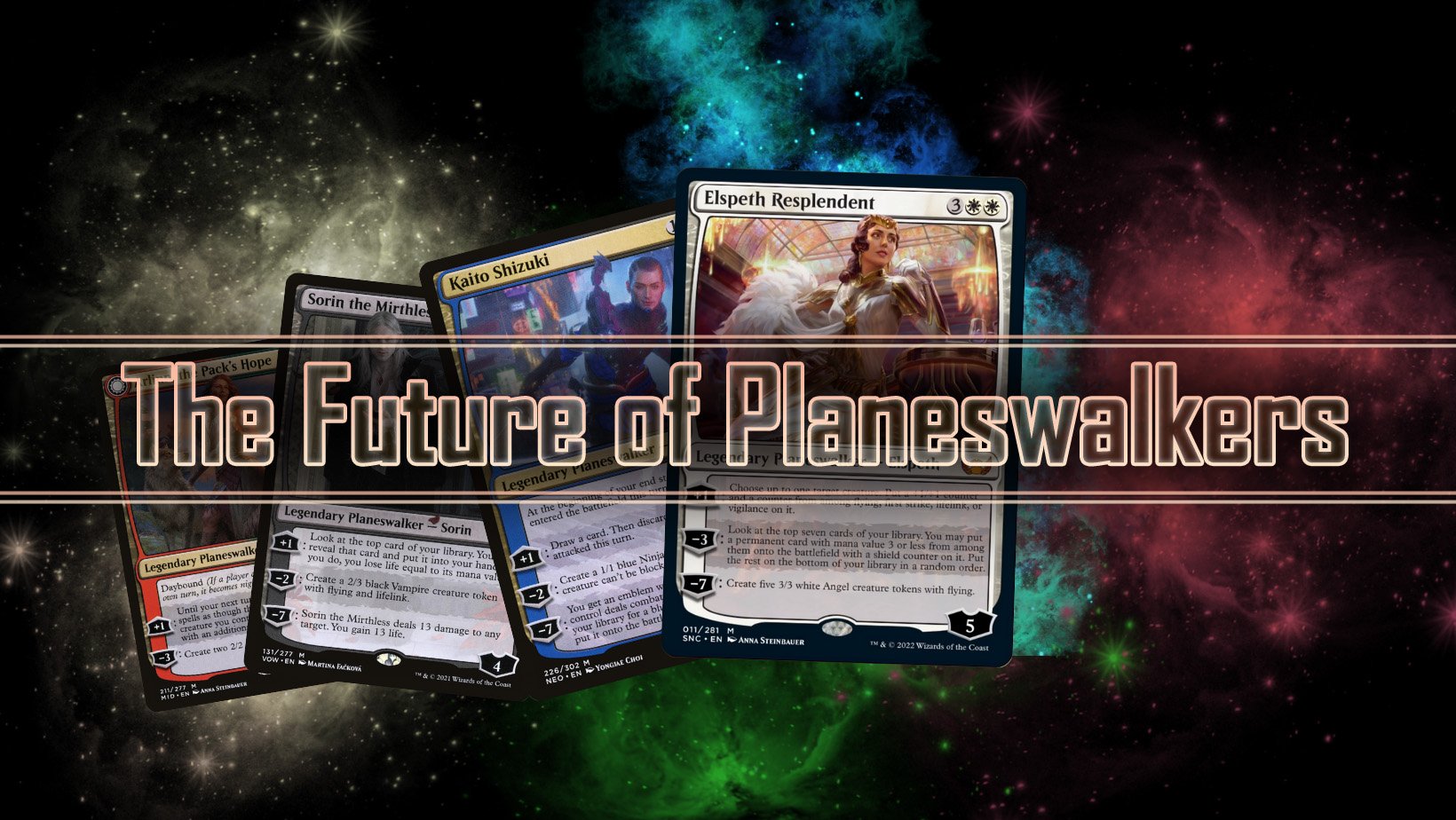 Hello everyone and welcome to Standard Weekly. This week’s article looks at the planeswalkers of future standard and their place in the format after fall rotation.

Each set typically has three planeswalkers. Some planeswalkers make their home on the plane that the set is exploring while others are visitors. The rest of this article looks at the planeswalker cards from each set remaining in standard. 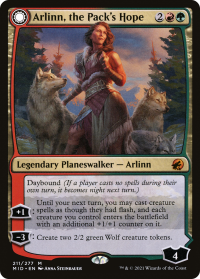 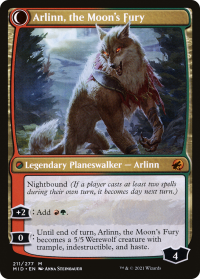 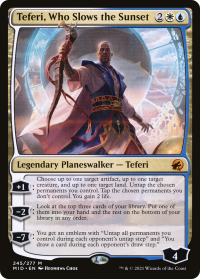 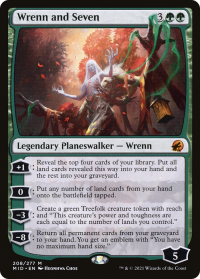 Innistrad: Midnight Hunt featured the return of Arlinn: The Pack’s Hope, Teferi, Who Slows the Sunset, and Wrenn and Seven. Arlinn is a werewolf native of Innistrad. Gruul midrange werewolf decks have used Arlinn, but she has not seen much play outside of this deck. Werewolves have not found a place in current standard because of the power of other decks. Rotation will put Gruul in a better place, but it will take a few helpful cards to make the deck anything more than a tier C or D deck, so expect Arlinn to remain on the sidelines in competitive play.

Over the end of 2021 and the early part of 2022, Teferi saw some play in Azorius Control decks but has all but disappeared since the arrival of Kamigawa: Neon Dynasty. Teferi’s +1 ability does not have the power of his Dominaria or War of the Spark card. The ability gains you two life and allows you to choose up to one target artifact, up to one target creature and up to one target land. The permanents you control get untapped while your opponent’s become tapped. His -2 ability allows you to look at the top three cards of your library and put one of them in your hand and the others on the bottom of your library. Past versions have given you the ability to draw cards as a plus ability. Teferi’s -7 ability is powerful but getting to 7 loyalty is the problem. Teferi will not see time in the sun unless a deck develops that can take advantage of his +1 ability.

The best planeswalker from Innistrad: Midnight Hunt is Wrenn and Seven. This is Wrenn’s first appearance in standard. Mono-Green decks have played 2-4 copies of Wrenn since it entered standard. Wrenn’s -3 ability creates a large threat an opponent must deal with quickly or face a growing threat each turn. Wrenn’s other abilities help support the treefolk that Wrenn creates and ramps the deck into more threats by drawing lands. As long as green has a place in standard, expect Wrenn to play a role in the deck. 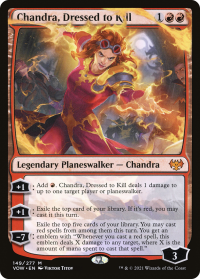 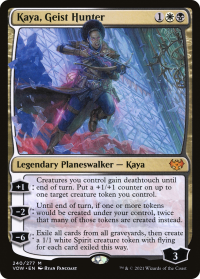 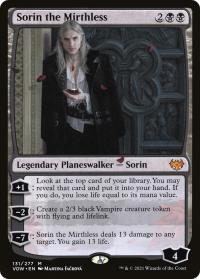 In the current standard format, neither Chandra nor Kaya sees much play because the overall power level of decks. Both have a chance to see more play after rotation. Chandra, Dressed to Kill is not as powerful as Chandra, Torch of Defiance, but for a mana less you get more flexibility. Both Chandra’s +1 abilities advance a player’s game plan by either providing card advantage or direct damage and an extra mana. Getting to Chandra’s ultimate ability puts your opponent on a short clock because each red spell casted becomes a burn spell equal to its mana cost. Kaya has potential to see play in a dedicated token’s deck, but most of the best token creating cards are not in black or white. We will have to see what Dominaria United offers to see if Kaya finds more of a role in standard.

Sorin, the Mirthless sees play in multiple decks because of his ability to protect himself with his -2 ability to create a 2/3 vampire with flying and lifelink. His plus ability lets you look at the top card of your library and gives you the option to draw the card by losing life equal to its mana value. You should expect Sorin to see play in a variety of black decks in Dominaria United standard. 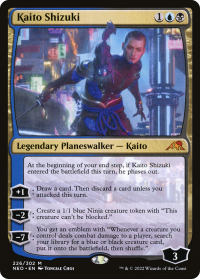 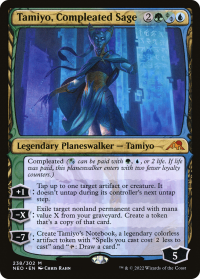 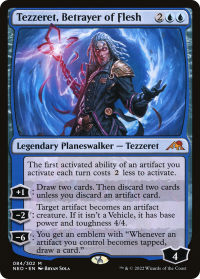 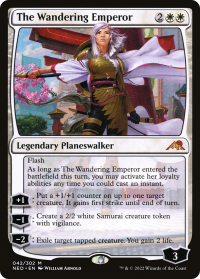 Kamigawa: Neon Dynasty provided two of the best planeswalkers in standard: The Wondering Emperor and Kaito Shizuki. Both give the ability to create a creature to protect itself or advance the board state. Plus, the Wondering Emperor’s ability to enter the game at flash speed allows her to enter the game on your opponent’s turn and activate a loyalty ability. Usually, her activated ability will either exile your opponent’s best attacking creature or create a 2/2 samurai token to block. This can quickly change a board state to your advantage. (A hint when you are playing against white decks that utilize The Wandering Emperor. When there is four untapped mana on your opponent’s size it probably means they have The Wandering Emperor in hand.)

Kaito’s +1 ability provides card advantage each turn by drawing a card when the ability is activated. To avoid discarding a card, you must attack before you activate the ability. Most players activate Kaito’s -1 ability the turn he enters play to create an unblockable ninja token. This will allow you to attack the next turn and prevent you from having to discard a card when you activate Kaito’s -1 ability. Also, Kaito’s ultimate -7 ability gives you an emblem with “Whenever a creature you control deals combat damage to a player, search your library for a blue or black creature card, put it onto the battlefield, then shuffle.” Getting to the emblem will allow you to flood the battlefield with creatures that help closeout a game.

Kamigawa’s final planeswalkers, Tamiyo, Completed Sage and Tezzeret, Betrayer of Flesh have seen limited to no play in standard. Tamiyo’s abilities do not offer much to advance a player’s game plan, so I do not expect Tamiyo to see much play going forward. On the other hand, Tezzeret does offer abilities that play well in a dedicated artifact deck. His static ability reduces the cost by 2 mana of the first activated ability of an artifact each turn. This reduces or eliminates the cost of attaching equipment to a creature or activating an artifact’s ability. If Tezzeret reaches 6 loyalty and you can activate his -6 loyalty ability then each artifact becomes a card draw engine. With the Brother’s War set coming in mid-November, Tezzeret might have the pieces needed to create a competitive deck. Whether Tamiyo or Tezzeret find a home in standard remains to be seen. We know that The Wondering Emperor and Kaito Shizuki will see significant play until they rotate out of standard in the fall of 2023. 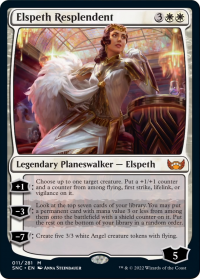 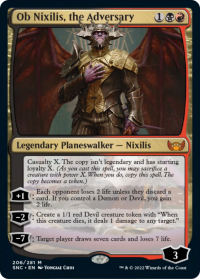 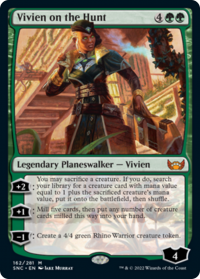 Streets of New Capenna brought to standard three popular planeswalkers: Elspeth Resplendent, Ob Nixilis, the Adversary, and Vivien on the Hunt. Elspeth has seen some play in Mono-White, Orzhov, and Azorius decks, but has not found a real home. I expect Elspeth to find a larger role once rotation happens. When Ob Nixilis was previewed, his card instantly become one of the most talked about cards in the set. The possibility of getting two planeswalkers for the price of one drove up the price of Ob Nixilis early in Streets of New Capenna standard. Unfortunately, Ob has not found the right shell to be a standard star yet, but with the loss of cards with rotation deck builders will continue to look for the right home for OB Nixilis. You can expect Ob Nixilis to find a home somewhere in the standard meta.

Since Viviens first arrived in 2018 her cards have consistently seen standard play. Unfortunately, Vivien on the Hunt does not have the playability of her previous cards. Her biggest problem is her six-mana cost. Few cards with that high a cost see play outside of commander. While Vivien’s abilities are solid, her mana cost relegates her to the sidelines in standard.

That’s a quick look at the planeswalkers from the sets that will remain in standard after rotation. Expect those with roles in the current meta to continue to see play while most of the others need help from future sets to gain more of a role in standard. My current Top 5 planeswalkers for standard 2023 are as follows:

Over the next few weeks, I will look at how rotation affects the most popular and successful decks currently in standard.