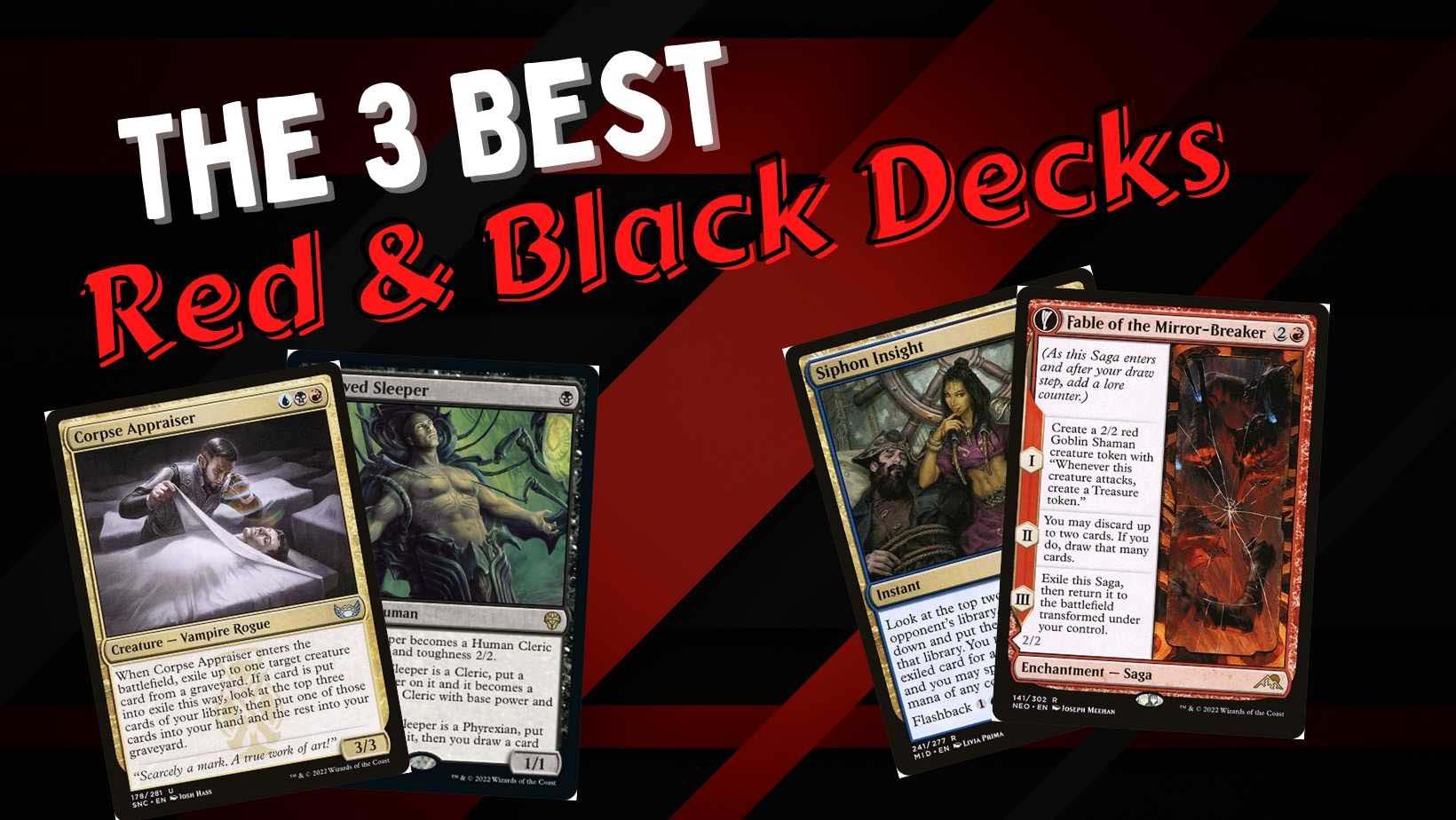 The decks presented below come from the best of three data on untapped.gg meta and tier lists.  The lists that appear have the best win rate among decks published on the site.  All of the decks have multiple versions that see successful play, but these seem to be the most successful.

Red has two key cards that it brings to each deck.  First is Bloodtithe Harvester.

It costs a red and a black mana to get a 3/2 vampire that creates a blood token when it enters play.  Its ability allows you to sacrifice Bloodtithe Harvester to give another creature –X/-X where X is equal to two times the number of blood tokens you control.  Bloodtithe Harvester provides the deck with an effective attacker or blocker that can remove a creature your opponent controls when needed.

The second red card is the saga: Fable of the Mirror-Breaker. 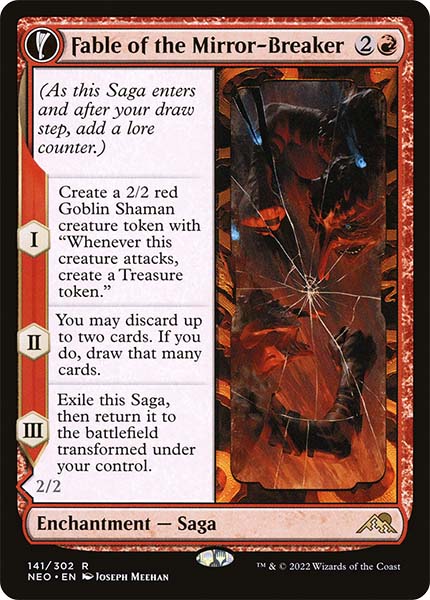 Fable has seen a lot of play since it arrived in Kamigawa: Neon Dynasty.  For three mana you get to create a 2/2 red goblin token that creates a treasure token when it attacks.  Chapter 2 allows you to discard up to two cards and then draw that many.  This allows you to discard unneeded cards to dig through your deck.  On chapter 3, Fable transforms into Reflection of Kiki-Jiki. 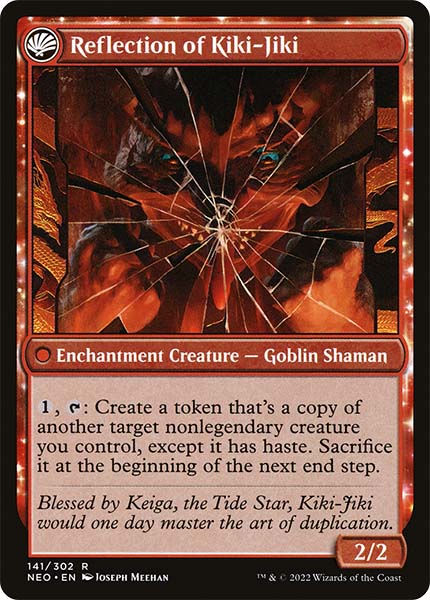 Reflection allows you to copy another creature you control.  Left unchecked this provides great value to the deck.

The deck utilizes the core of the Mono-Black shell with the aforementioned red value cards.  A card that this deck employs that not all black decks do is Evolved Sleeper.  For one black mana you get a scalable 1/1 human.  Below are the scaling abilities. 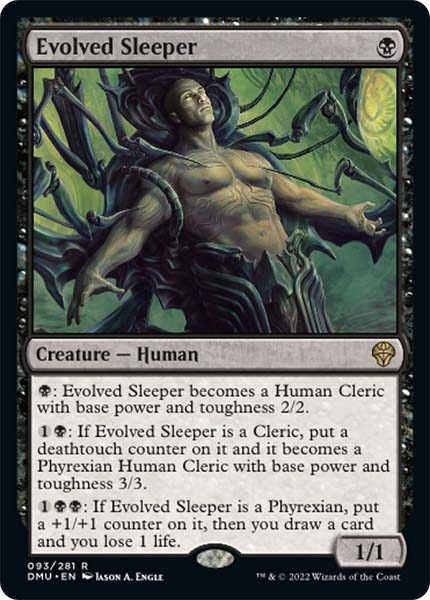 {B}: Evolved Sleeper becomes a Human Cleric with base power and toughness 2/2.

{1}{B}: If Evolved Sleeper is a Cleric, put a deathtouch counter on it and it becomes a Phyrexian Human Cleric with base power and toughness 3/3.

Evolved Sleeper is a fantastic mana sink.  After you activate the first two abilities, you can activate the third ability as many times as you want.  This gives you a +1/+1 counter for Evolved Sleeper and you get to draw a card and you lose 1 life.  This added draw ability matters in the mid to late game when you are in top deck mode.  Getting two cards a turn and growing Sleeper creates good value and makes it more and more difficult for your opponent to deal with Evolved Sleeper if he cannot remove it.

This version of the deck utilizes Liliana of the Veil as a removal card that can force you opponent to sacrifice a creature.  Liliana prefers that you have empty handed, so that you can activate her plus one ability without having to discard a card.  She works best in games where your opponent is not playing many creatures.

Next is Grixis Midrange.

Adding blue to the deck allows Rakdos Midrange to utilize two different creatures from the Mono-Black and Radkos builds of the deck.  Corpse Appraiser costs a blue, a black, and a red mana for a 3/3 vampire rogue that allows you to exile up to one target creature card from a graveyard. 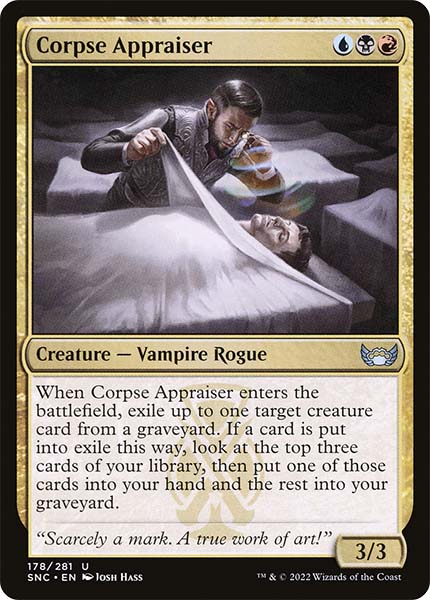 If you are able to exile a card this way, you get to look at the top three cards of your library and put one of those cards into your hand and the rest into the graveyard.  This ability allows you to dig into your deck for a card that you need and lets you put in your graveyard less desirable cards.

The second creature is Ertai Resurrected. 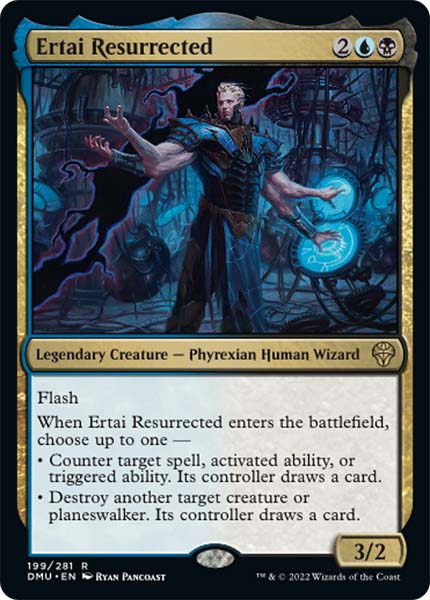 This legendary Pyrexian human wizard cost four mana to get a 3/2 creature that has an activated ability when he enters the battlefield.  When Ertai Resurrected enters the battlefield, you get to either counter a target spell, an activated ability, or a triggered ability or you can destroy another target creature or planeswalker.  Ertai’s flexibility makes him a valuable card to play in the mid to late game to counter a spell or ability or to destroy a threatening creature or planeswalker.  The fact that the spell only cost four mana makes it a great deal for the cost.  Normally, it costs a minimum of two mana for the same effect with a counter or removal spell.  Here you get a 3/2 creature and the activated ability for only four mana.  It is not uncommon to play Ertai during combat to destroy one attacker and block another.  In games you are ahead, you get to counter a key spell the opponent has cast or to prevent a planeswalker from using a loyalty ability.  Ertai should continue to see play in this build of the deck and I suspect Ertai will find his way into other decks.

Fires of Victory deals damage to a target creature or planeswalker equal to the number of cards in your hand.  Plus, you can kick the spell for three additional mana to draw a card.  This will increase the damage by one.  Playing this early in a game can remove nearly all of the creatures that see play in standard and it is not uncommon for a player to have three or four cards in hand during the mid to late game because of the reliable card draw in Grixis Midrange.

Rona’s Vortex costs one blue mana.  For one mana, you get to send an opponent’s creature or planeswalker back to their hand.  On its own, this is not a bad ability, but when you kick the spell, you get to put the card on the bottom of your opponent’s deck.  This makes the card all but inaccessible for the remainder of the game.  With all of the graveyard interaction currently in standard putting a card on the bottom of your opponent’s deck can short circuit their game plan. 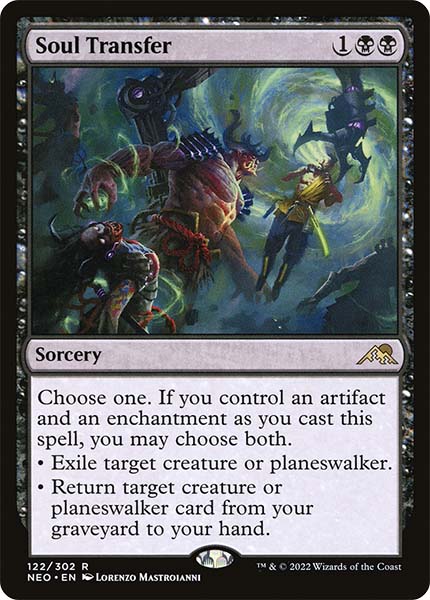 For three mana, you usually will exile an opponent’s creature or planeswalker  This prevents the reanimation effects that we see in Jund Midrange or in some white decks that use Invoke Justice. .  Its other option is to return target creature or planeswalker card to your hand.  Finally, if you have an enchantment and an artifact in play you get to use both abilities.  While this does not happen regularly, it is possible to have both an enchantment and an artifact in play to get access to both parts of the spell.

Finally, we have Grixis Vampires.

The only new creature in this build is Evelyn, the Covetous.  Technically, Evelyn could go in a Rakdos or Mono-Black deck because of her flexible mana cost.  She cost five total mana to cast.  You could use three black mana, two black and one red mana, a blue and two black, or one of each color to cast Evelyn.  For this mana you get a legendary 2/5 vampire with flash.  This allows you to play Evelyn on your opponent’s turn as a potential blocker in combat or at any time that would give you an advantage.  Like the other cards discussed today, Evelyn offer a valuable ability.  When you cast Evelyn or another vampire, you get to exile the top card of each player’s library with a collection counter on it.  Then once each turn you may play a card that you exiled with a collection counter on it as long as an Evelyn is on the battlefield.  This allows you to dig into both players decks for pieces that will accelerate your game plan.  Getting to play your opponent’s best card because Evelyn exiled it feels good and can quickly turn the game in your favor.

The final card to discuss today is Siphon Insight. 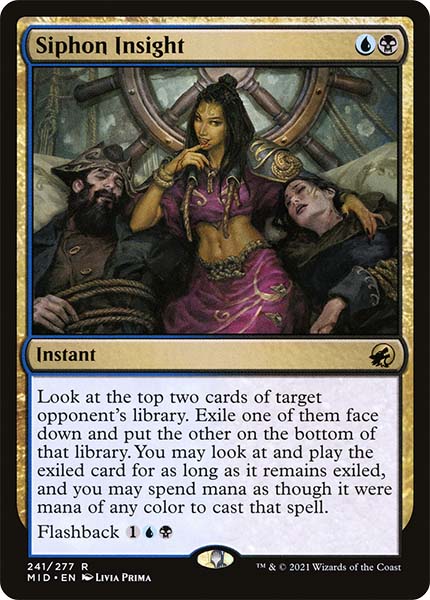 That is a quick look at the red black decks popular in standard.  Each one has a good win rate that makes it playable at a Friday Night Magic or other event.