Selecting The Right Deck For Your Playstyle

Selecting The Right Deck For Your Playstyle 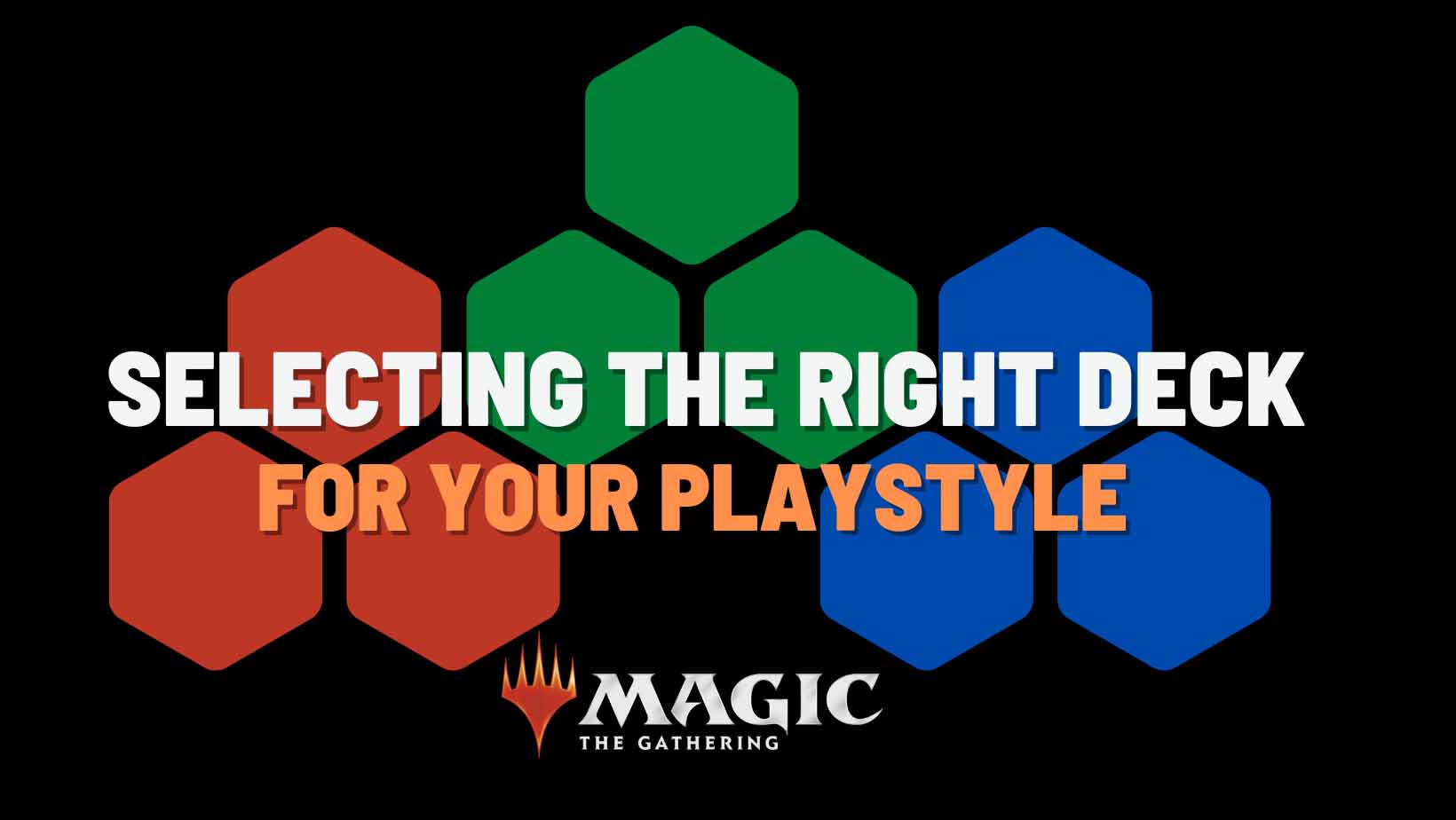 Hello everyone!  Welcome to standard weekly.

When I finished last week’s article, my plan for this week was to look at specific decks and how rotation affects each one.  That’s not how the article turned out as I was writing it.  This week’s article looks at the different types of decks, the basic elements of each type, and ways to get to know each type.  Next week I will look at how rotation affects Jeskai Hinata and Esper Raffine.

One of the most important decisions a player makes is deck selection.  There are three primary deck types: aggressive (aggro), midrange, and control.

Aggro decks want to quickly fill the battlefield with cheap creatures and finish the opponent off before they can get their game plan going.  Most aggro decks want to defeat an opponent by turn six, and sometimes as quickly as turn four.

Midrange decks have early answers to an opponent’s gameplay, and then drop powerful creatures onto the battlefield during the mid-game to take control of the match.

Control decks look to counter spells early in the game and have board wipes or spot removal spells to eliminate early threats.  Then control decks use card advantage, large threats, or planeswalkers to create a sense of inevitability to close out the game once an opponent has run out of cards.

Pairing Playstyle With The Right Deck

Each type of deck presents a unique playstyle with inflection points in a match that tend to determine the outcome of games.

For example, when an aggro deck faces off against a control deck, the aggro player wants to optimize the use of the threats (creatures) in their opening hand before the opponent gets a chance to cast a board wipe or play just enough threats to convince the control player that they have to wipe the board or loss.  When the control player does not have the opportunity to remove threats with spot removal or board wipes, the game ends quickly as the aggro player floods the battlefield with more and more threats.  On the other hand, when the control player has effective spot removal or a board wipe early in a game it becomes difficult for an aggro player to rebuild fast enough to win.  For each player, deciding when to use the cards in their hand plays a major role in determining the outcome of a match.

As you become more familiar with Magic’s gameplay, you will find other deck types that are offshoots of these primary types.

One of the long-standing decks in the Modern format is burn.  Rather than relying on only cheap creatures to quickly close out a match, burn players utilize a few creatures that have abilities that complement the instants and sorceries that do direct damage to an opponent’s life total.  These spells usually inflict three damage at a time and cost only one mana, so a player can quickly play the cards in his hand and have their opponent at a low life total early in the game.  Hopefully, ending the match by turn five or six.

Finding your preferred playstyle is as important as the cards in a deck because you will play your best when the deck suits your playstyle.  As you explore different decks, try each of the three play styles so you learn each approach to the game, and discover what suits your personal style.  Playing on MTG Arena or at your local game store, Caffeinated Gamers, during events or at Friday Night Magic is a good way to learn from other players and develop your personal style.

Another way to learn about different playstyles is by watching YouTube videos or streamers.  Don’t worry if it takes you some time to develop your personal style.  Part of the enjoyment of Magic is taking chances and maybe playing a deck that you do not see as a fit for your playstyle.

My personal playstyle favors aggro decks,  yet the current deck I play in standard is Jeskai Hinata.  This deck is part control, part midrange, and part combo deck.  The deck has challenged me because it relies on big threats and costly spells to beat an opponent.  Even when I am winning with the deck, I often feel behind in games because of the play style differences.

As you learn more about the game of Magic, a term you will come across is metagame.

Metagame refers to the variety of decks played in a particular Magic format.  A healthy metagame has at least three or four decks that perform well.

Typically, a healthy meta has decks representing each of the three playstyles.  When one deck dominates a format, Wizards of the Coast typically looks for ways to improve the metagame.  This could happen through the banning of a card from the format or even the introduction of a new set can change the overall game experience.  Before the arrival of Streets of New Capenna, aggro decks did very well in standard.  Now midrange decks have taken over the format.

Since this series looks at standard Magic let us examine the current standard metagame.

Currently, the standard metagame is very healthy.  The format has at least a dozen playable decks with midrange decks at the top of the format.  Jeskai Hinata sits at the top of standard followed by Esper Raffine (Midrange), Boros Aggro, Grixis Vampires (Midrange), and Jund Midrange.  Each deck could win an event on any given day.  This makes weekly FNMs exciting to play in because anyone could win the event.

Over the next several weeks, this series will look at some of the top decks currently in standard and their viability after rotation.  Some decks will survive rotation because they will lose only a few cards while others will lose too many few cards to survive.