Hidden Gems from The Brother’s War

Hidden Gems from The Brother’s War 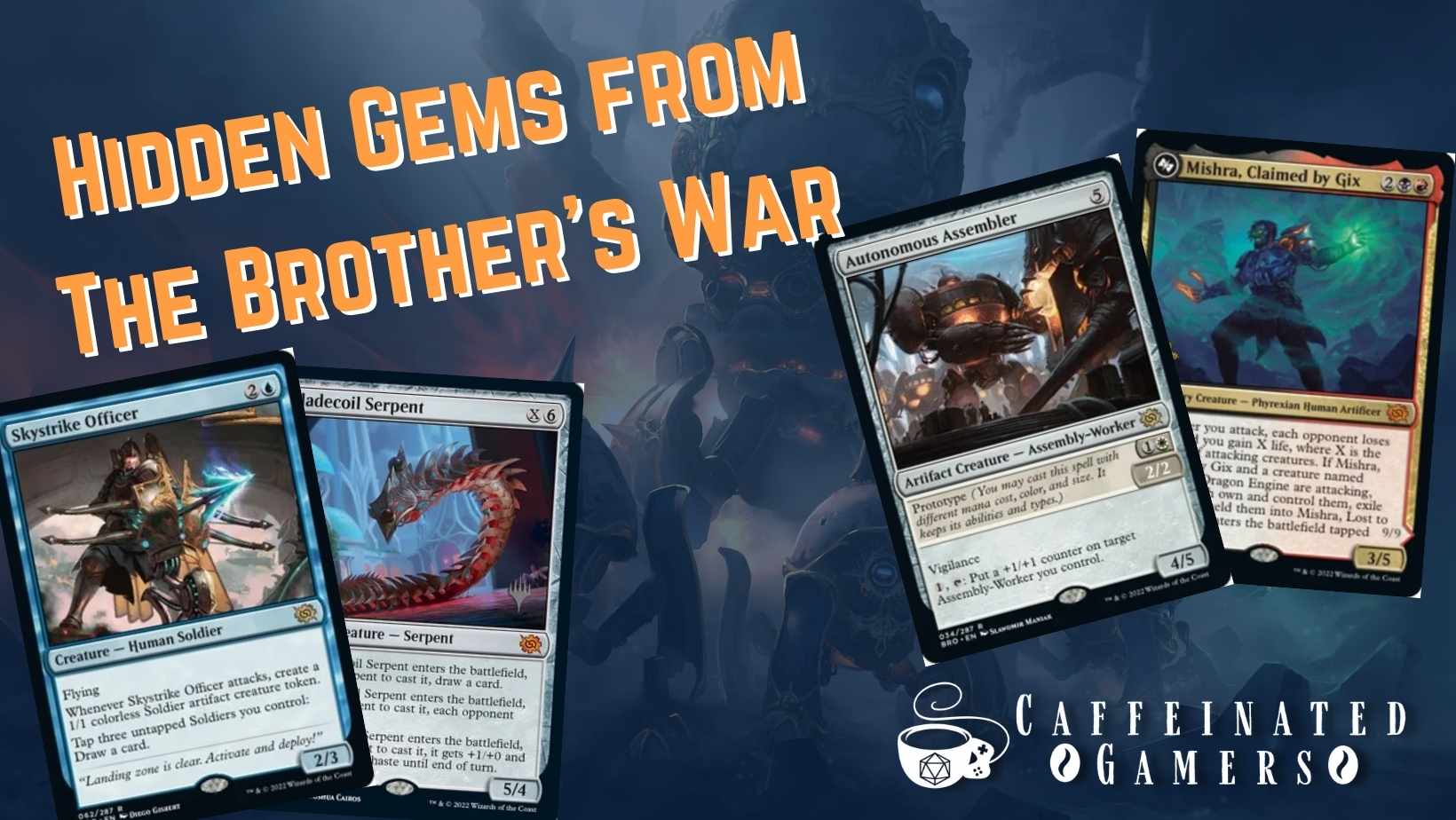 I hope everyone had a chance to get out to their local LGS to participate in The Brothers’ War events.  Set launch events are a great way to introduce new players to the game and get back into the game after the Covid hiatus.  Prereleases are a great way to get introduced to the cards in a set.  Sometimes you find hidden gems that got little hype during preview season or find out that some of the most hyped cards are not as good as some believed.

Prerelease events tend to be slower standard because of the limited card availability.  The Brothers’ War offered more cards than a normal prerelease because of the Retro Frame Artifacts in the set.  This sped up the format.

Here are four cards that impressed me.

First, Mishra, Claimed by Gix over-preformed for me.

Getting to gain life and deal damage to my opponent just for attacking was a very powerful ability.  Typically, I attacked with three or four creatures when Mishra was in play.  This meant that my opponent really needed to kill Mishra, but that proved to be a difficult task because of his five toughness.  I see Mishra in a midrange deck, but I can see him in an aggressive deck that can get creatures in play early in the game and then you can play Mishra to get in additional damage.

I played Autonomous Assembler in a Grixis deck.

Bladecoil Serpent could be one of the best cards in standard assuming that midrange decks continue to dominate standard.

Skystrike Officer played much better than I anticipated.  For three mana, you get a 2/3 human soldier with flying.  On its own,

Skystrike officer is a solid creature, but his ability made him a nearly unstoppable force at the prerelease.  Making a 1/1 colorless soldier artifact creature each time it attacked turned out to be a game-changing ability because it allowed my opponent to tap three untapped soldiers and draw a card.  This kept my opponent ahead on cards and board presence.  That matchup was my only match loss of the night.

Adding Skystrike Officer to the main deck as a four of makes sense given its ability to create 1/1 artifact creature soldiers.  Given the need to remove key threats of your opponent, I added removal to the main deck.  Two copies of Destroy Evil, Fateful Absence, and Lay Down Arms should allow you to deal with the best creatures in the format.  Post-sideboarding, you will be able to adjust the removal package in the deck to better align the removal package to your opponent’s game plan.   To make room for the new cards, I removed Thalia from the deck to open slots for Skystrike Officer and lowered the total count on other creatures.

Soldiers was a solid deck at the prerelease.  This makes me more confident that the deck will be playable in standard.  Skystrike Officer gives the deck evasion that will keep the deck going even when the opponent has a good board presence.

Based on the Arena early access event standard should remain a healthy format.  The top decks will get help from the cards from the Brothers’ War while new decks like Azorius Soldiers will see significant play early in The Brothers’ War standard season.  I expect that a control deck will form around Urza, Lord Protector and Teferi, Temporal Pilgrim.  Green looks like it might have the critical mass of cards to get back into standard.  Finally, whether the deck is Grixis or Rakdos, Mishra, Claimed by Gix is an outstanding card that could either be the top end of an aggro deck or the glue that brings a midrange deck together.

I can’t wait to get to the next Friday Night Magic to see how other adjust existing decks to the cards from The Brothers’ War set.  And remember that the decks you see on MTG Arena typically will not be what you see at a Friday Night Magic because you must open the cards for your deck in packs, trade for them, or buy singles.  Eventually, players will get the cards they want, but it will take some time.  So don’t feel that you can’t go out to your local LGS because you lack the physical cards to play a deck popularized on Arena.