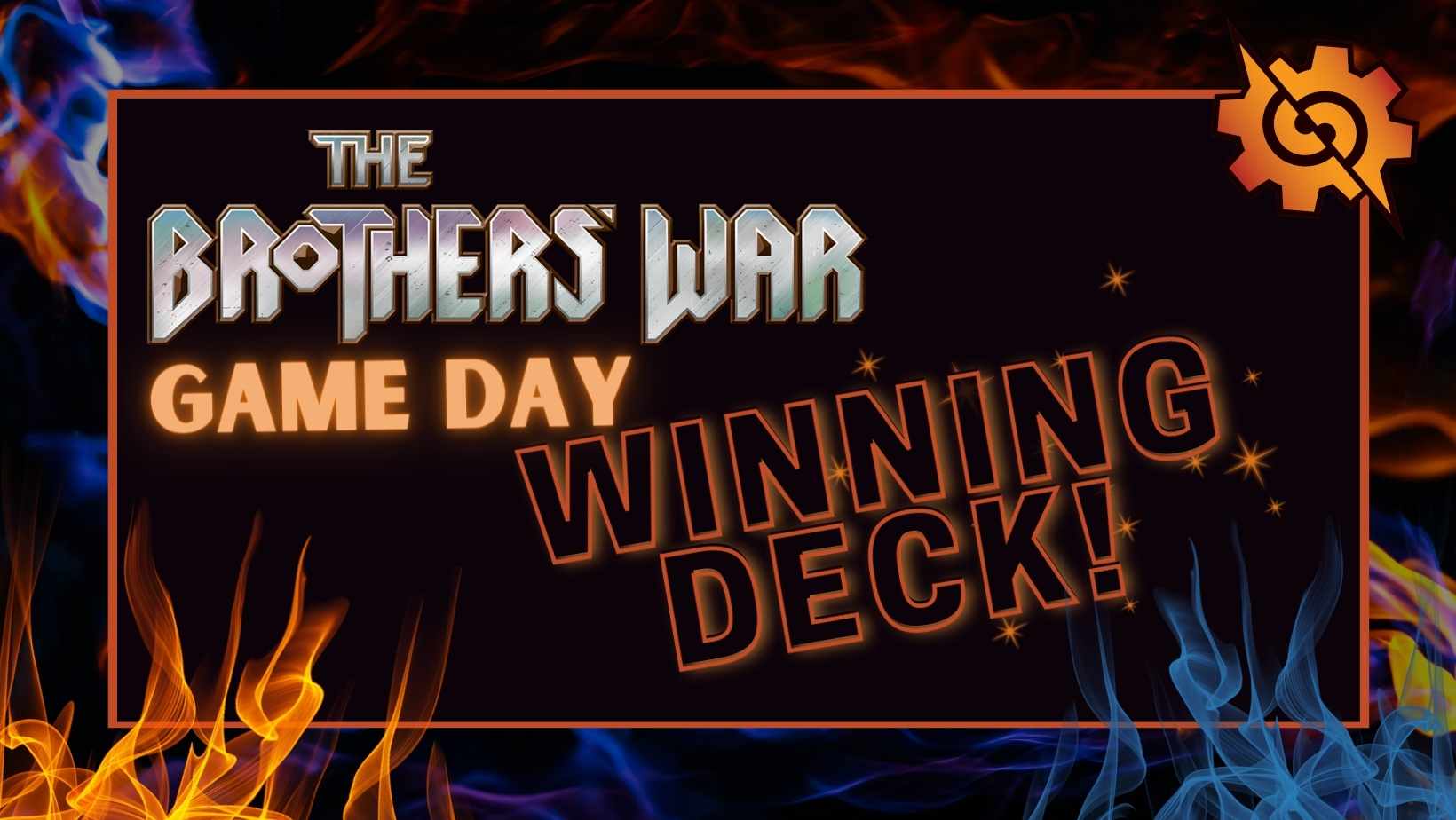 Last Saturday, Caffeinated Gamers held their Game Day event and last week’s article looked at what are arguably the best decks, so far, in The Brothers’ War standard season.  In preparation for the event, I looked at those decks and determined that I would either play Azorius Soldiers or Esper Raffine at the event.

I really wanted to play the Teferi deck because of its power level.  In the practice matches I played on Arena the deck did not perform up to my expectations.  I would win game one or two but lose game three.  In the games I lost, my opponent got much more removal than I did, and this led to my losses.  As a result, I began changing the deck to give myself more opportunities to win.

For Teferi, Temporal Pilgrim to be successful, you must draw cards beyond your normal draw step.

For this, I added Silver Scrutiny to the deck.

Typically, I found myself with more mana than I needed.  Silver Scrutiny draws X cards, so it should be easier in the mid to late game to have enough mana to draw five or six cards with the spell.  This should get Teferi close to his ultimate ability and remove my opponent’s board by sending it back to his hand.

Most of the week, I played Azorius Soldiers on Arena to test the deck.  It performed well.  In Best-of-One, Mono-White is the better version of the deck because it has access to Lay Down Arms to remove a creature and exile it.  The Azorius build of the deck does not have enough plains in the deck to use the spell.  Also, Myrel was the best card in the deck once I was able to attack with her.  She usually created four or more token artifact soldiers each turn, then doubled it the next turn.  The best of three version does not typically use Myrel, but I plan to because of her power in the game.

I also prefer Guardian of New Benalia over Resolute Reinforcements.

Guardian’s enlist ability allows you to shape the top of your deck and dig for the best cards in the matchup.  When I played without Guardian in the deck my top decks got worse and at times lower powered creatures that I would activate Guardian’s enlist ability would sit on my side of the battlefield with little to do in the mid to late game because they were not longer good attackers.

With that being said, I took both decks to Friday Night Magic to see if I should go with Azorius Soldiers for Game Day or if I should stick with the deck I knew best, Esper Raffine, despite the problems I had with it on Arena over the course of the week.  I decided to play the Soldier deck because I knew how Esper Raffine would mostly fair against the players I face at Friday Night Magic.

Here is how the night went with the Soldiers deck.

First, we had an uneven number of players, so someone had a buy each round.

My first match was against Mardu Angels.  I played the first game on the draw.  The game did not go well.  I was overwhelmed by flyers that I could not deal with on the board.  I was able to get Skystrike Officer in play, but I missed several opportunities to draw cards with the soldiers I had in play.

Game two went much better.  I curved out starting with Recruiting Officer on turn one, then Valiant Veteran on turn two, and Skystrike Officer on turn three.  With my growing board presence and a counterspell in hand, I left mana open to use it against a possible The Wandering Emperor.  I made the right decision and counter The Wandering Emperor gain me the win in game two.  Game 3 went mostly like game one.   Being on the draw put me behind and I could not match the power of the Angels deck.  For the third game in a row, my opponent played Giada, Font of Hope on turn two.

This allowed him to Serra Paragon on turn three.  On my turn I used Brutal Cathar to exile Serra Paragon from the game.  Then he cast Archangel of Wrath.  This killed my Brutal Cathar ending my game.  He was able to attack for lethal the next turn.  What I learned was that the lack of removal in the builds that are seeing success on Arena did not work well in paper.

In match two, I played against Mono Blue Tempo on the draw.

Game one went well for my opponent.  He played Delver of Secrets on turn one then Haughty Djinn on turn 4.  I was not able to get my board going, so he won on a single Haughty Djinn attack.

Game two went much better.  I was able to get creatures down early in the game, while my opponent did not.  This allowed me to pile on damage quickly taking game two.  In game three, I drew about half of the land in my deck and lost to Haughty Djinn.

I received a buy for round three because I lost my round 1 and 2 matches,  ending my night.

Overall, a bad night for Soldiers.  What I learned was not having Guardian of New Benalia in the deck was a problem and that I must have at least four removal spells beyond Brutal Cathar.  Had I been able to remove Giada on turn two of my first match I would have slowed down my opponent and the same goes for Haughty Djinn in game two.

After both games, I played pickup games with the Esper deck.  They went much better, so I decided to go with Esper Raffine for Game Day.

We only had enough players for three rounds of swiss with all players making it into the top 8, so the event lasted only three rounds.

My first match was against Mono Red.  I had better luck than on Friday with dice roles, so I went first.  I played Ashnod on turn one then Raffine on turn three.  I played Sheoldred on turn four to begin gaining life with the connive triggers from Raffine.  This quickly ended the game.

In game two, I had to mulligan, so I keep a risky hand with Sheoldred, Teferi, and Ao, the Dawn Sky with three lands.  On turn four, I played Sheoldred to try to stabilize the board.  My opponent responded by using two Lightning Strikes to kill Sheoldred.  I did not get my fifth land on time, and I got run over from there.

Back on the play for game 3, I started with a better hand.  I played Raffine on turn three and connived him to victory.  I got most of my spot removal to deal with the threats my opponent played, and I countered Keldon Flamesage which played a big role in his game two win.

Game 2 did not go well.  My opponent played a Stormchaser Drake on turn two and I did not have removal for it.  He targeted Stormchaser Drake on turns four and five with Homestead Courage to give it vigilance.  I left open mana on each of those turns to play The Wandering Emperor to exile it, but I was not able to execute my plan because of the vigilance on the Drake.  By this time, I had no board presence and multiple threats I could not deal with.  Game 2 went to my opponent.

Game 3 I was back on the play.  I got a good had with Dennick, Pious Apprentice, Raffine, Scheming Seer, and Sheoldred, the Apocalypse.  Played Dennick on turn two.  My opponent countered with Illuminator Virtuoso.  Then I played Raffine on my third turn to start conniving onto Dennick.  This did two things I needed.  First it gave me life gain and second it created a threat on my side that Illuminator Virtuoso could not kill on turn three by blocking.  My turn four play was Sheoldred.  Turn five I played Teferi, Temporal Pilgrim to increase my board presence with the spirit token from Teferi.  With Sheoldred in play, I kept gaining life and my opponent lost life every time he targeted Illuminator Virtuoso.  In all he lost 10 life to Sheoldred triggers winning me the match.

Match 3 was for the championship.  My opponent played Mono-Black.

For the third straight match, I played first.  My opponent got off to a quick start with Evolved Sleeper and Tenacious Underdog.  Then he was able to use direct removal to kill each creature I played.  This resulted in a lopsided victory in game 1.

Game two I was on the play again.  I drew two bad hands and had to mulligan to five cards.  I was able to get enough removal in the game to deal with his early threats.  Then he flooded in the mid to late game.  I got enough creatures in play to take game 2.

Games three I was on the draw.  Despite taking game 2, I feel that it would be an uphill battle to win game 3.  He played Evolved Sleeper on turn one.  I countered with Ashnod.  He offered a trade during combat on turn 2, so I took it.  He played his Sheoldred in the mid-game.  I had Teferi in play at this point and from a Teferi draw I got an Infernal Grasp to kill his Sheoldred.  From there, my Raffine and Spirit token took over the game to get me a win and repeat as Game Day champion.

I have mentioned this before, but it bears repeating here.  Paper Magic is very different from Arena.  On Arena, most players will have the cards to play the solved version of a deck.  This is not the case in paper Magic.  Unless someone can trade for or purchase all the right cards for a deck, typically you will not face the Arena version in paper.

Mono-Black is a great deck, but my opponent was missing key cards.  He only had one copy of Sheoldred, and this hurt him in the matchup.