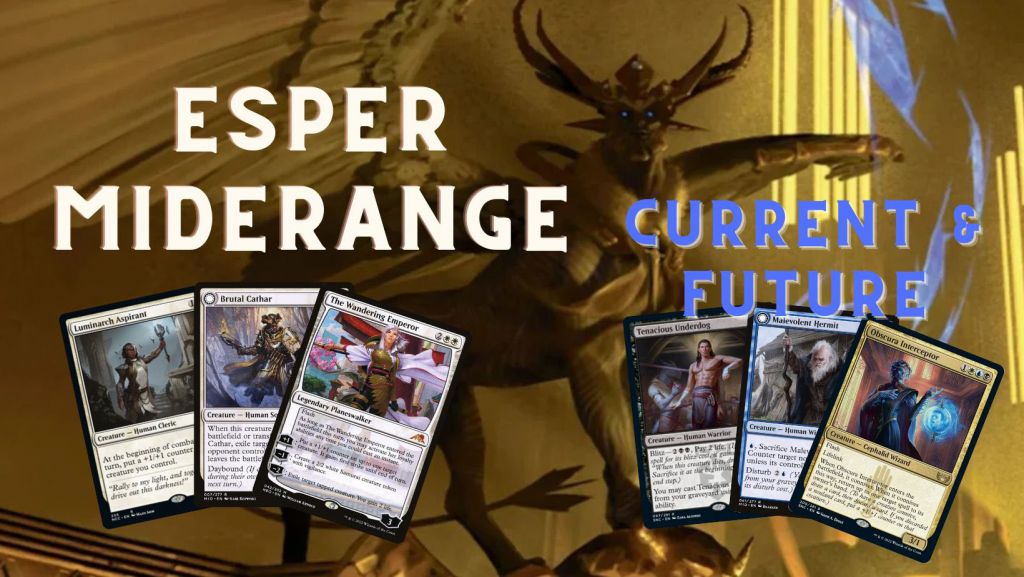 This week’s article looks at Esper Midrange. Currently, the deck sees significant play and consistently appears in the Top 8 of events.

The deck includes a variety of creatures that give Esper Midrange the ability to play a fast or long game.  The deck is built around Raffine, Scheming Seer. 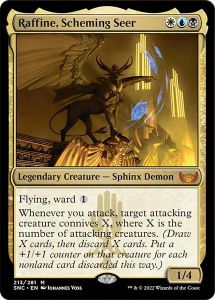 For a black, blue, and white mana, Raffine offers an evasive threat with Ward 1, flying, and grows itself or another creature through his connive ability. When you connive, you draw a card and then discard a card. You get a +1/+1 counter that goes on the creature that connived when you discard a non-land card. Raffine’s connive ability activates when one or more creature(s) attack with Raffine on the battlefield. You then select one attacking creature to connive. This creature connives equal to the number of attacking creatures. This ability lets you filter through the cards in your deck and puts your opponent on a short clock unless your opponent can remove Raffine from the battlefield. 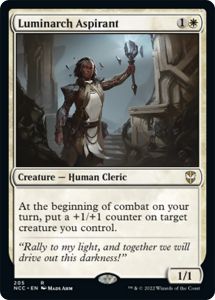 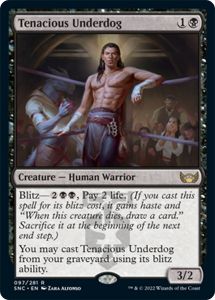 For two mana you get a 3/2 creature with blitz. This makes it a threat that an opponent needs to deal with early in the game and a recurring threat through its blitz ability.

The blitz ability gives Tenacious Underdog the ability to return from the graveyard after it dies or is discarded. Casting Tenacious Underdog from your graveyard costs two colorless mana and two black mana plus the loss of two life. A creature cast with blitz gets haste, so it can attack the turn it was cast. Then, when it dies either in combat or at the end of the turn, you get to draw a card.

The card advantage created by Tenacious Underdog with its consistent ability to damage an opponent makes it a valuable piece in any black deck that survives rotation.

After Raffine, Scheming Seer, Luminarch Aspirant, and Tenacious Underdog, the different builds of the deck employ various creatures to fill out the deck’s threats. Typically, we see one or more of these creatures filling the last four creature spots in the deck: Legion Angel (rotating), Obscura Interceptor, Skyclave Apparition (rotating), Faerie Vandal, Nullpriest of Oblivion (rotating), Sanctuary Warden, All-Seeing Arbitor, Malevolent Hermit, Dennick, Pious Apprentice, Brutal Cathar, Liesa, Forgotten Archangel, Giada, Font of Hope, and Spectral Adversary. Most survive rotation, but no consensus has been reached about which creatures should be part of the deck. With the variety of options available, it might be some time before a clear set of creatures completes the deck.

After rotation, Obscura Interceptor, Malevolent Hermit, and Brutal Cathar could see a larger role in the deck.

Obscura Interceptor offers a flexible threat with flash that connives when it is cast and returns up to one target spell to its owner’s hand. Then you have a 3/1 or 4/2 creature with lifelink to attack with on your next turn. The ability also sets your opponent back a turn because they typically do not have another play after returning their spell to their hand. 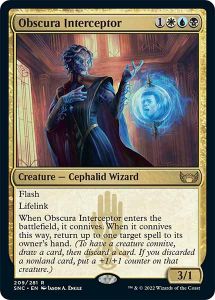 Malevolent Hermit is a 2/1 creature for two mana that you can sacrifice to counter a target non-creature spell unless its controller pays 3 mana for only a blue mana. This will make an opponent think twice before casting an important non-creature spell with Hermit in play. Hermit gives you an early threat that becomes a counter spell later in the game. When Malevolent Hermit leaves play and goes to the graveyard, you can return it to the battlefield for three mana with its disturb ability to play Benevolent Geist. This gives you a 2/2 spirit wizard that prevents your opponent from countering your non-creature spells while it is in play. The flexibility of the card has led to it seeing play in some versions of the deck and might be the right replacement for Luminarch Aspirant. 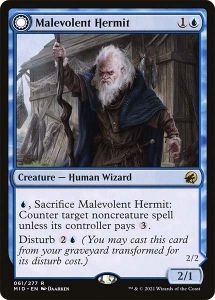 Brutal Cathar has seen significant play in white decks since arriving in standard in Innistrad: Midnight Hunt. The ability to get a creature and, at the same time, exile your opponent’s best creature (while Brutal Cathar is on the battlefield) has made it a mainstay in white decks. If Esper Midrange wants more controlling elements post rotation, then Brutal Cathar offers a good value piece for the deck. 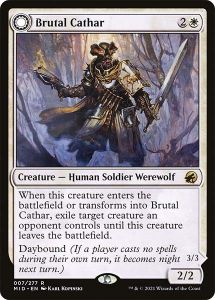 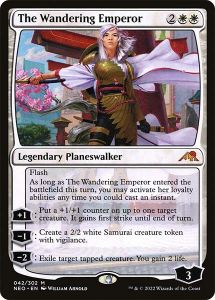 With Lolth rotating out of standard, expect to see either more copies of Kaito or Sorin post rotation unless the Liliana from Dominaria United can fill the role played by Lolth.

Black and white offer the deck a variety of quality removal options. In black, Esper employs Ray of Enfeeblement(rotating) to takeout white creatures, Infernal Grasp to destroy a creature, and Meathook Massacre to clear the board of an opponent’s creatures.

White offers Portable Hole(rotating) to exile a permanent with a mana cost of two or less, Depopulate destroys all creatures, and Farewell is a spell that can exile all artifacts, creatures, enchantments, and/or graveyards. The deck will lose Ray of Enfeeblement and Portable Hole with rotation, but all the others leave the deck with quality mono-colored removal options.

Many versions of the deck play Wedding Announcement. 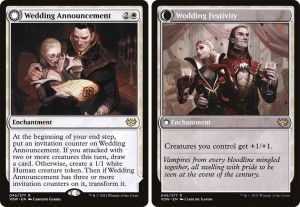 Esper Midrange’s success should continue after rotation because it loses only a few cards that other available cards can replace. In addition, Dominaria United should provide additional pieces for the deck. Expect to see Esper Midrange at Friday Night Magic, on MTG Arena, and at other standard events.