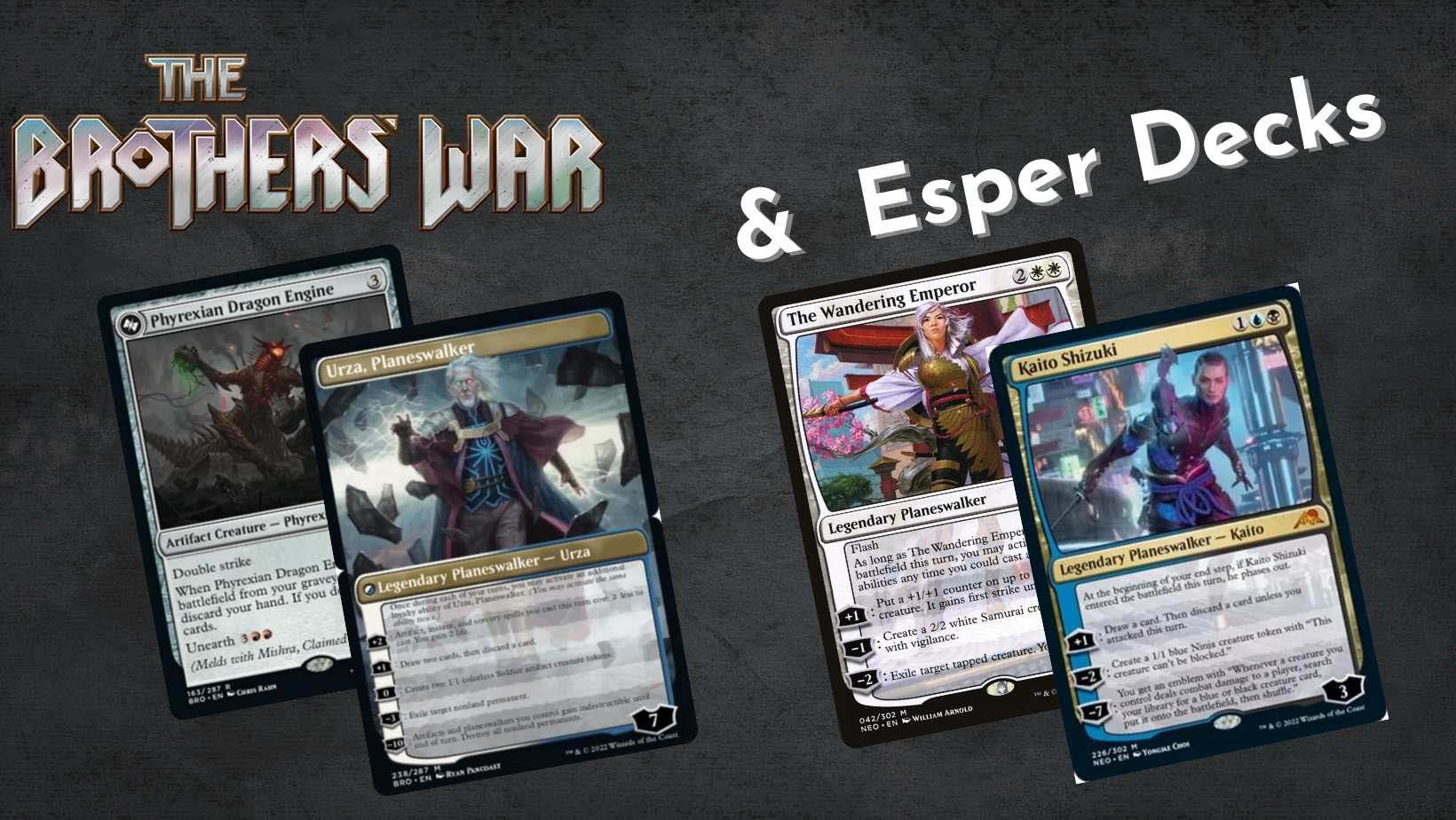 The big Magic: The Gathering news over the past week and a half was the reveal of Urza and Mishra cards from The Brother’s War.  Each card has a meld ability that activates when paired with another card in play.  Both cards look very playable with Mishra the easier of the two cards to activate its meld ability. 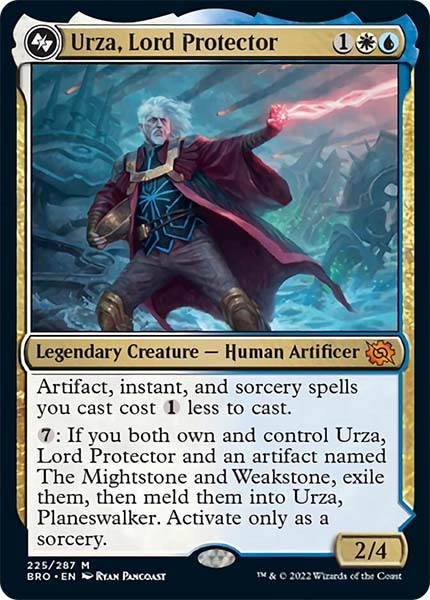 Urza, Lord Protector is a good card on its own.  Getting to reduce the casting cost by one mana for artifacts, instants, and sorceries will speed the deck’s game plan.  Haughty Djinn has the same ability to reduce the cost of instants and sorceries that Urza has and this helped make Mono-Blue Tempo a good standard deck. 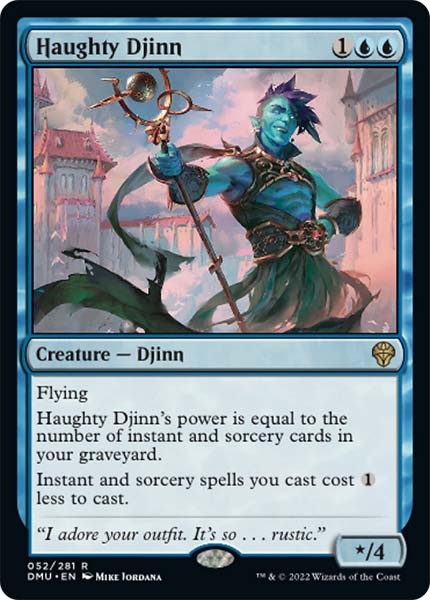 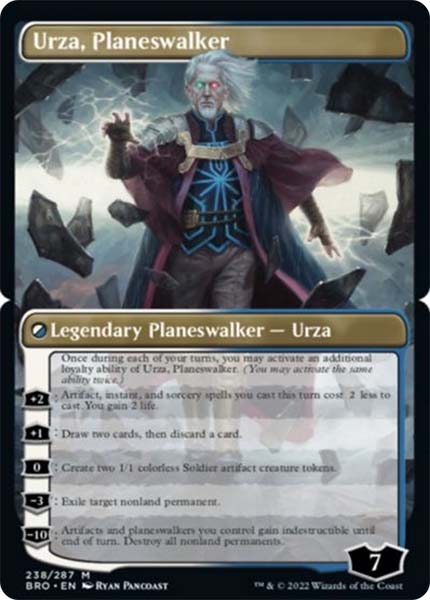 The meld cost of Urza, Lord Protector is seven mana, but after you factor in the two mana that The Mightstone and Weakstone produces the real cost is five mana.  Then Urza, Planeswalker will likely take over the game from there because you get to use his abilities twice each turn.  I see Urza fitting well into a traditional control deck or a tempo deck. 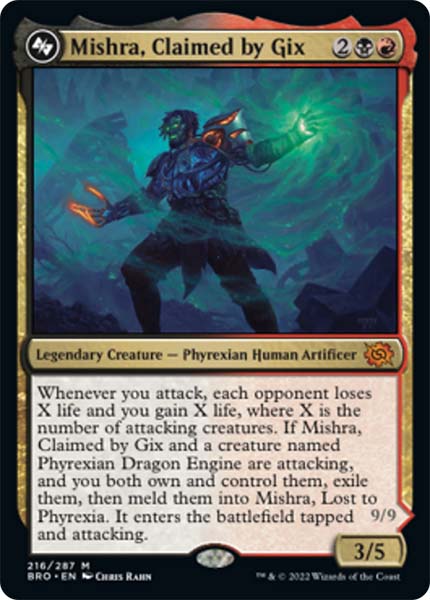 When you attack with Mishra in play, his ability to drain each opponent’s life and gains life for you at the same time for each attacking creature makes him a powerful creature without his meld ability.  Then when you attack with a Phyrexian Dragon Engine and Mishra, Claimed by Gix, you meld them to create Mishra, Lost to Phyrexia. 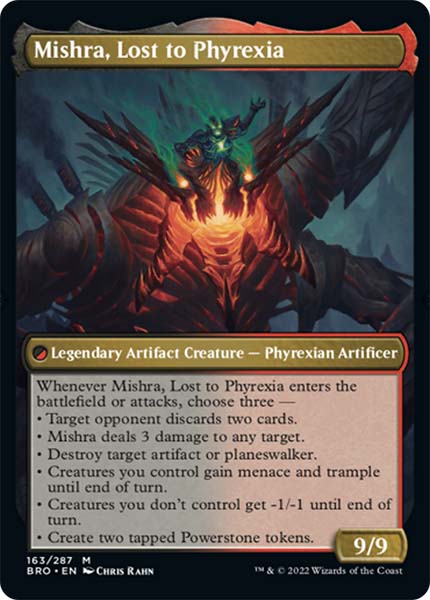 This version of Mishra is one of the most powerful creatures in Magic’s history.  When Mishra attacks, you get to activate three abilities that will make it difficult for an opponent to survive more than a turn or two, if they cannot remove Mishra.  Giving each creature you control menace and trample until the end of the turn should finish your opponent quickly.  Rakdos and Grixis already offer powerful decks that Mishra should fit into nicely.  You can look at last week’s article that looked at Rakdos Midrange and Grixis Midrange.

Currently, there is not a clear version of Esper or Azorius Control.  What we have are a variety of Esper Midrange builds having success in standard.  Based on Untapped.gg and tournament results, Esper builds centering around Raffine, Scheming Seer and Sheoldred, the Apocalypse have the most success.  Here are a couple of examples of Esper Midrange decks.

This version of Esper Midrange pairs with Raffine and Sheoldred with Dennick, Pious Apprentice and Ao, the Dawn Sky.  With Tenacious Underdog and Cathar Commando these other creatures give the deck early action with “go big” threats late in the game.  Dennick has lifelink and says that cards in graveyards cannot be the target of spells or abilities. 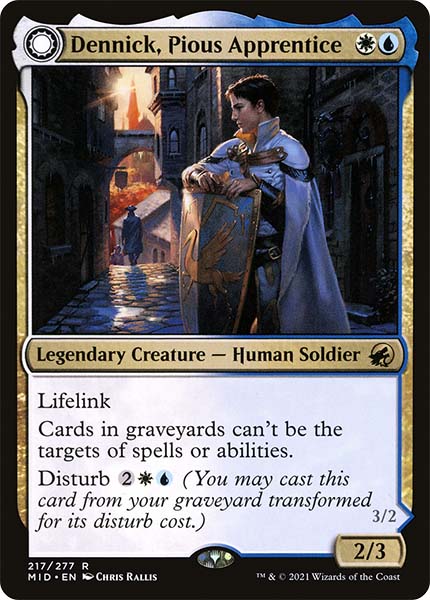 This turns off the abilities of Tenacious Underdog and Graveyard Trespasser making them less valuable in Mono-Black and other decks.  Cathar Commando has flash and the ability to destroy an artifact or enchantment. 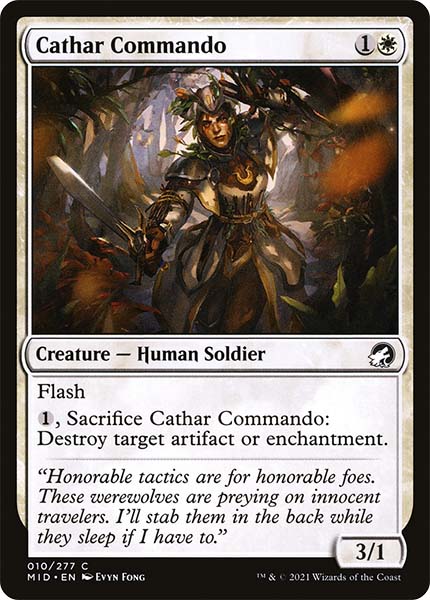 This helps remove permanents that present a problem for name decks.  Ao, the Dawn Sky serves as a finisher in the deck that provides value when it dies.

The deck has quality removal with Infernal Grasp and Destroy Evil coupled with additional removal options in the sideboard.  Destroying your opponent’s large threats with either card helps keep you in games where your opponent has a strong board presence.  Giving you the time to setup a turn with Raffine and Sheoldred in play where you can connive to gain life and hit your opponent hard.

Another version of Esper Midrange is Esper Heroes (Legends).  The deck has a win rate of over 60% on MTG Arena.

Dominaria United provided a good stable of legendary creatures to build decks around.  Of these creatures, one of the most interesting is Ratadrabik of Urborg. 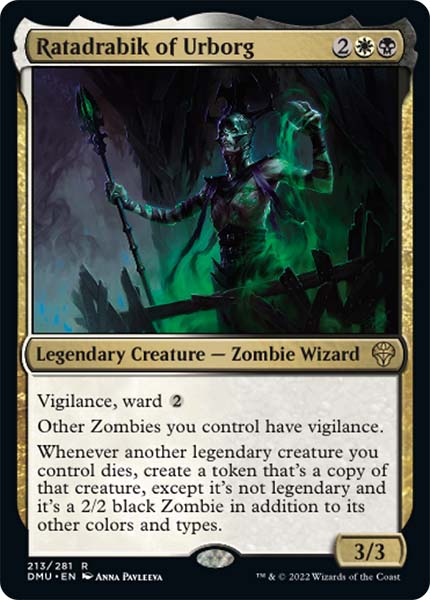 Ratadrabik’s ability to return other legendary creatures to play as 2/2 zombies with their abilities provides a great deal of value to the deck.  His ward cost of two makes him harder to kill with spot removal.  Left unchecked he tends to take over games.

This version goes all in on the legendary creature theme with thirty creatures in the main deck.  Two drops include Thalia, Guardian of Thraben, Jadar, Ghoulcaller of Nephalia, The Raven Man, and Elas il-Kor, Sadistic Pilgrim.  Each provides early value with an upside.  Thalia taxes non-creature spells, Jadar creates zombie tokens, The Raven Man creates bird tokens, and Elas il-Kor gains life each time a creature enters the battlefield on your side.

Adeline, Resplendent Cathar, and Anointed Peacekeeper provide glue to the deck.  Adeline’s ability to create a human token when you attack provides ongoing value while Anointed Peacekeeper taxes a non-land card two mana and causes its activities abilities to cost two additional mana.  Each becomes the target of removal over other cards because of the value created by each one.

Ao, the Dawn Sky gives the deck evasion and a great death trigger.  Getting to give your creatures two +1/+1 counters or allows you to look at the top seven cards of your library and put up to four mana worth of non-land permanents’ worth of value onto the battlefield.  This could be one card or up to four cards depending on how the deck is constructed.  Typically, one three or four-mana creature is selected, but you could get a pair of two drops.

The final creature is Ertai Resurrected.  Ertai’s ability makes him a powerful card in the deck.  When you cast Ertai you get to either counter a spell or an activated ability or destroy a creature or planeswalker.  This gives you a tempo advantage that can cause your opponent to concede the game.

What the deck lacks is removal.  With only one Destroy Evil and one Make Disappear, the deck is limited in how it responds to the opponent’s threats.  When your opponent is able to develop their board position before you can it takes a lot to come back in those matches, so removing a few of the creatures and adding additional removal from the sideboard is almost a necessity post-sideboarding.

As the meta continues to develop, Esper Midrange and Esper Heroes should continue to see play and have a solid place in the meta.  With additional legendary creatures coming in The Brother’s War, these decks should only gain strength in the coming weeks.

Scott began playing Magic the Gathering in 1994.  His preferred format is standard.  Typically, you will see him playing aggro decks focused on quickly defeating his opponent but he will pivot to midrange or control when standard is unfavorable for aggro decks.  He began creating Magic content in 2019.