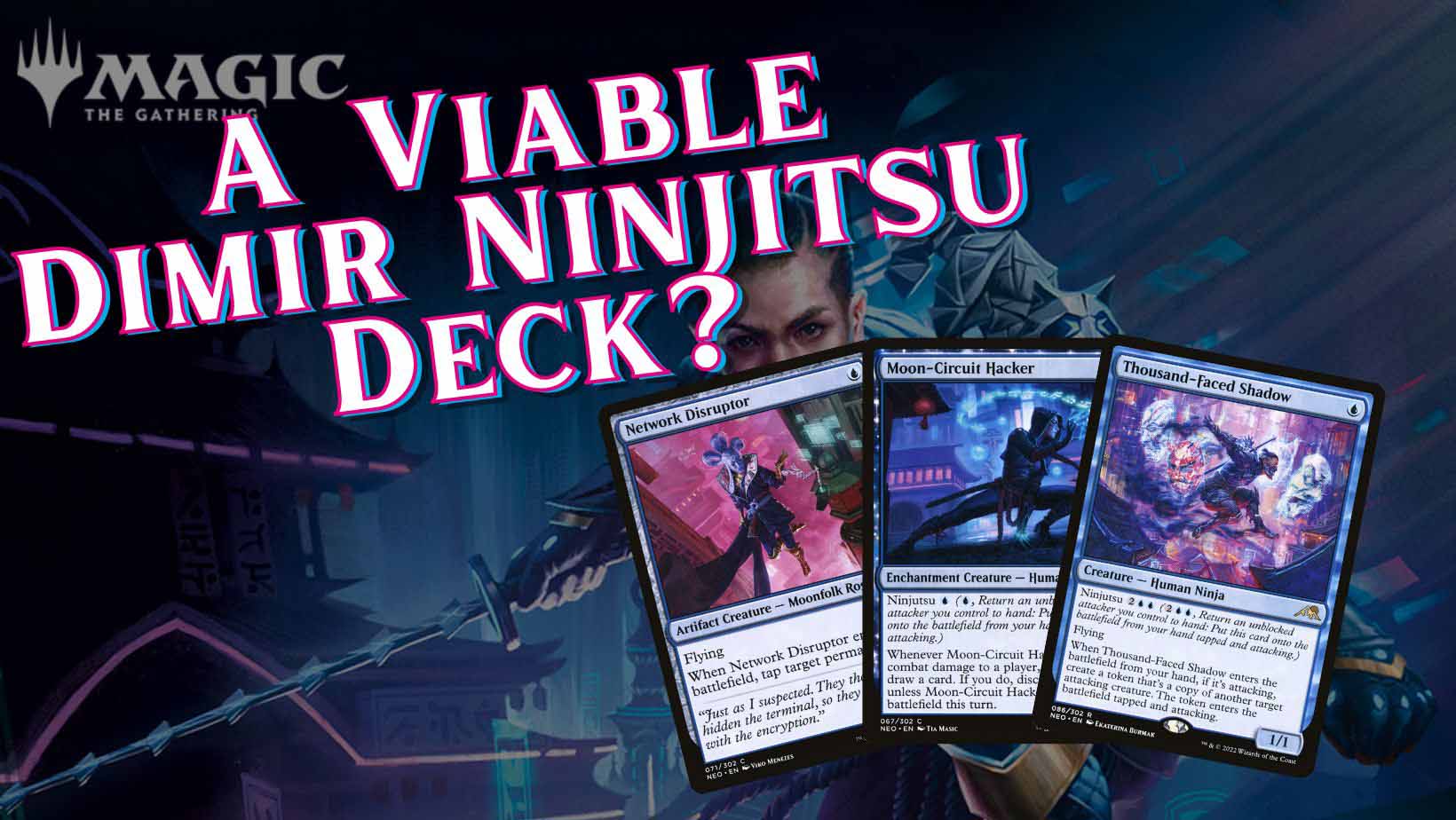 Hello everyone! Welcome to Standard Weekly!

I hope you had a better first week of Dominaria United season than I did. I played Esper Raffine with an unrefined mana base and unclear replacement cards for those that rotated and got punished for it. As is the norm during the first week of a new standard season, aggro decks ruled the night.

That brings us to the topic of today’s article. With rotation, the meta is open to new decks and allows us to revisit decks that did not quite have the power to compete in the previous format. When Kamigawa: Neon Dynasty’s mechanics were revealed ninjutsu returned as a mechanic. Since the set arrived in February players have worked to develop a viable Dimir Ninjutsu deck. That deck might be ready to have its time in the light.

Dimir Ninjutsu employs a group of one and two-drop creatures that bring value when they deal damage to an opponent or provide a good target to use other creatures’ ninjutsu ability. 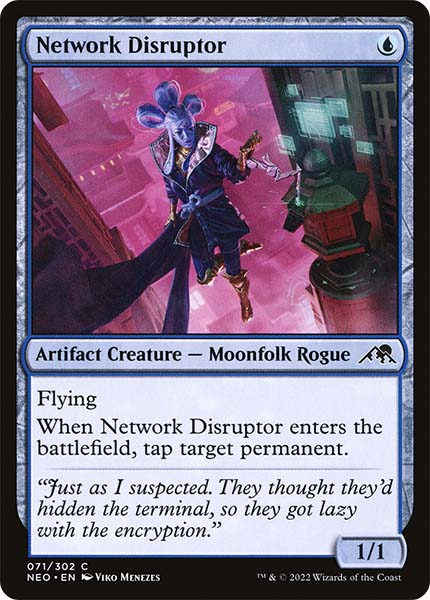 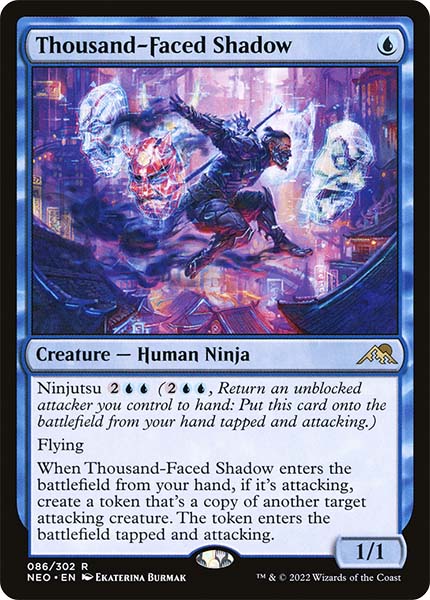 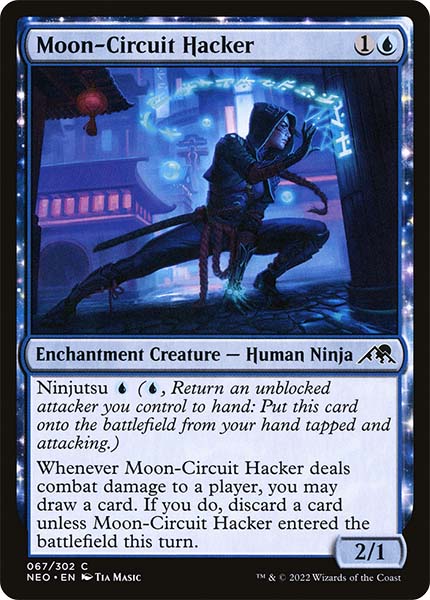 At the two-drop spot, are Moon-Circuit Hacker and Silver-Fur Master.  Moon-Circuit Hacker provides big value for the deck.  It is a 2/1 creature that may loot for you when it does combat damage to a player.  By getting to draw a card and then discard a card when you deal damage to a player.  This allows you to shape your hand and discard unneeded lands or other cards.  The may part of the ability lets you decline the ability when you do not have a card you what to discard.  Moon-Circuit Hacker typically is the first creature you will want to ninjutsu into play on turn two because if it entered the battlefield this turn you do not have to discard.  This has the effect of giving you a Consider or Opt without the ability to look at the top card of your deck.  Dealing the extra point of damage also helps. 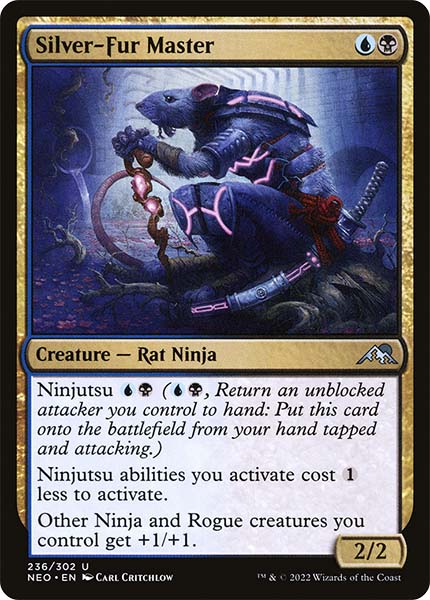 The three-drop spot gives us Biting-Palm Ninja, Prosperous Thief, and Nashi, Moon Sage’s Scion.  Biting-Palm Ninja cost two colorless and a black mana for a 3/3 human ninja that enters play with a menace counter.  When you deal combat damage to a player, you may remove the counter to exile a nonland card from your opponent’s hand.  The ability to force the exile of a card from an opponent’s hand can bring big value to your overall game plan because it can exile a board wipe or other card that could derail your game plan.  Typically, you will ninjutsu Biting-Palm Ninja into play, so that you guarantee getting to see your opponent’s hand and exile a card. 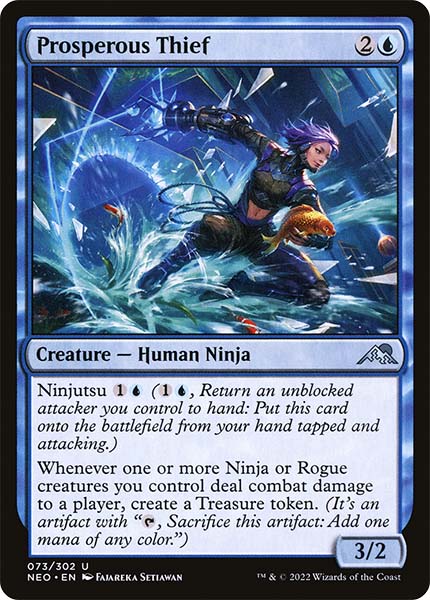 Prosperous Thief costs two colorless and a blue mana to cast.  You get a 3/2 human ninja that creates a treasure token when you do damage to a player.  The damage does not need to be from Prosperous Thief.  This gives you extra mana to use when you need it because as we discussed earlier, you will discard lands when you need too with Moon-Circuit Hacker’s ability to loot. 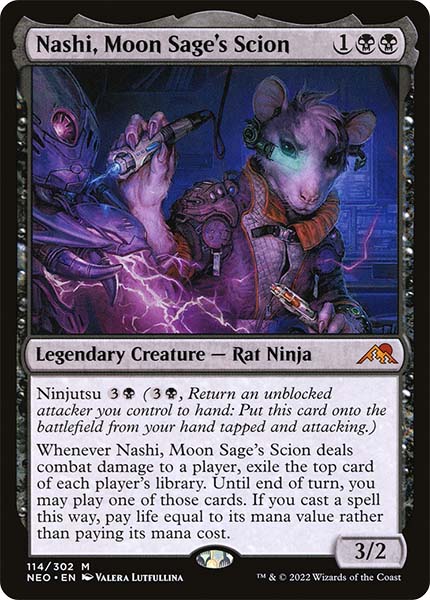 The final creature in the deck is Nashi, Moon Sage’s Scion.  For a colorless and two black mana, you get a 3/2 rat ninja that when Nashi deals damage to a player, exile the top card of each player’s library.  Until end of turn, you may play one of those cards, but you must pay life equal to its mana value rather than paying its mana cost.  Nashi would have more than one copy in the deck if you could use mana to cast the card.  Another downside is that Nashi cast four mana to ninjutsu into play.  This makes ninjutsuing him into play more challenging. 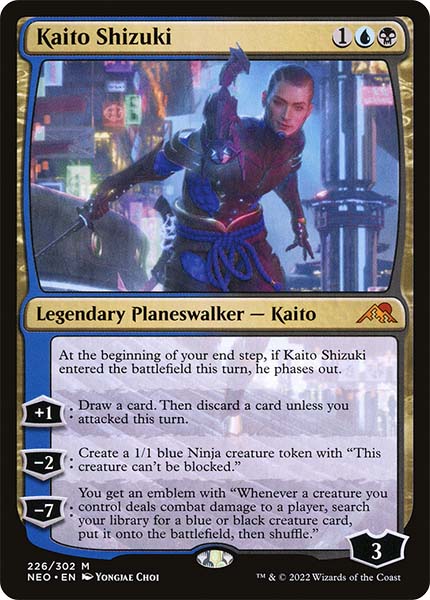 Kaito Shizuki was designed to use in a ninjutsu deck.  For a colorless, blue, and black mana you get Kaito a legendary planeswalker with three loyalty.  His plus one ability draws a card.  Then discard a card unless you attacked this turn.  Most of the time you will attack every turn playing ninjas, so this really is plus one to draw a card.  For minus two, you create a 1/1 blue Ninja creature token with “This creature can’t be blocked.”  When you don’t have a creature that can safely attack, creating the ninja token is a good way to ensure that you get an extra card draw each turn that Kaito is on the battlefield.  Kaito’s final loyalty ability costs seven loyalty.  When you activate it, you get an emblem with “Whenever a creature you control deals combat damage to a player, search your library for a blue or black creature card, put it onto the battlefield, then shuffle.”  You will not get to this ability often, but when you do can flood the battlefield with creatures over a couple of turns and make victory seem inevitable.  Finally, Kaito protects himself the turn he comes into play because he phases out at the beginning of your end step the turn he comes into play.

Currently, the deck has three copies of Kaito, but it might be better with only two copies of Kaito and a second copy of Nashi in the deck.  How the deck does over the next few weeks will help determine if this is the correct card choice.

The mana base for the deck is a little awkward.  Dominaria United did not provide a pain land in blue and black, so four of the eight dual lands in the deck enter the battlefield tapped.  Dismal Backwater gives you one life when it enters play and Waterfront District can be sacrificed to draw a card.  These added abilities make the fact that they enter tapped a little easier, but as soon as we get the blue/black pain land in The Brother’s War these cards should be swapped out for the pain land.

The deck’s sideboard is designed to provide extra removal spells and counterspells for the deck.  New inclusions include Hero’s Downfall and Rona’s Vortex.  Hero’s Down Fall kills a creature or planeswalker.  Rona’s Vortex for a blue mana returns a permanent to your opponent’s hand and when it’s kicked it puts the card on the bottom of your opponent’s library.  It’s possible as the format develops that these cards could see main deck play.