A Look Back at Streets of New Capenna Part 3

A Look Back at Streets of New Capenna Part 3 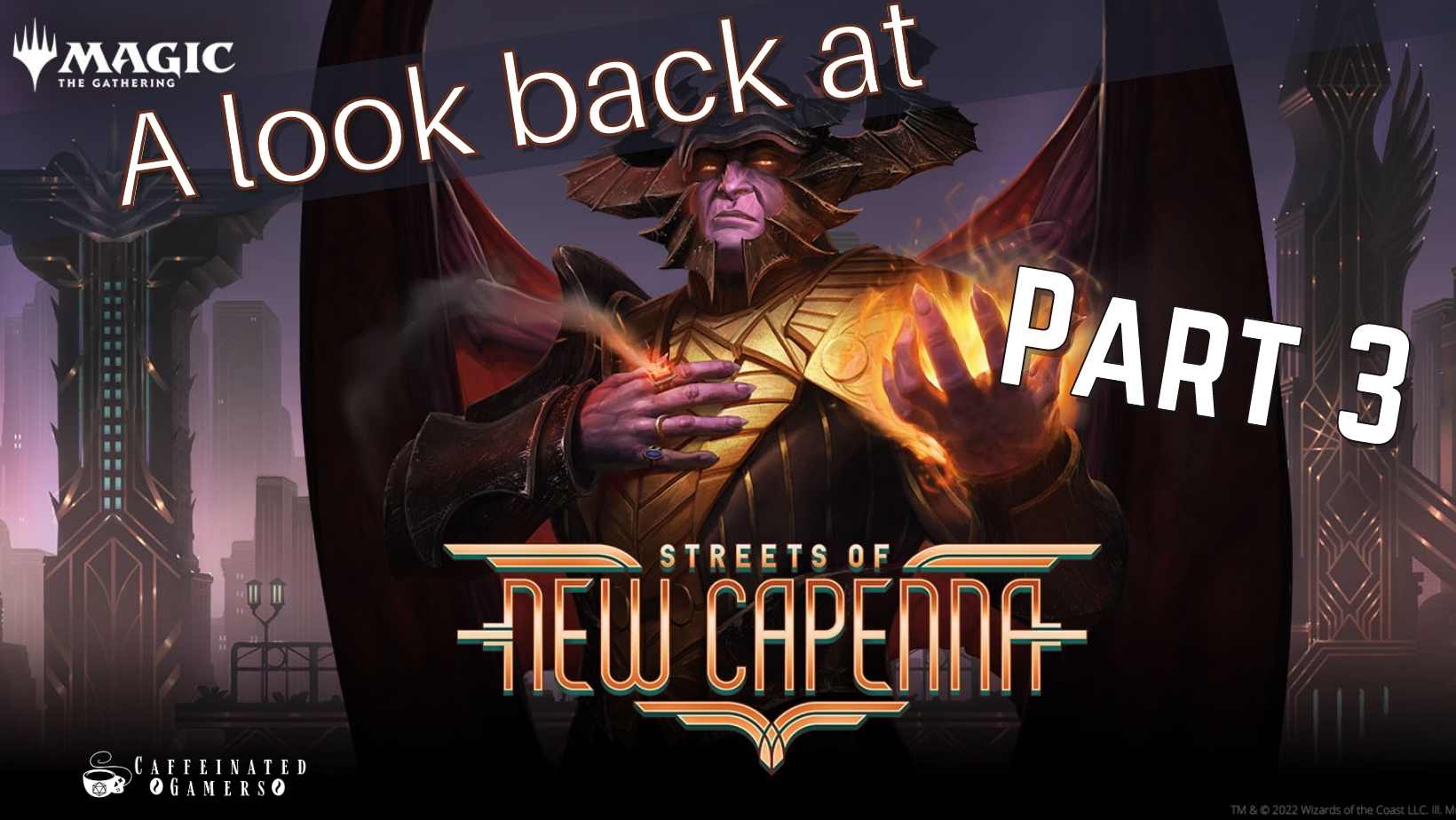 Another set, another disappointing one for red.  Since Throne of Eldraine red has seen only a few usable cards and as a result Mono-Red went from one of the best decks in standard to an afterthought.  Streets of New Capenna did little to change that.

Big Score and Strangle have seen the most play among red cards from the set.

Big Score is and instant that draws two cards and creates two treasure tokens for three colorless and a red mana and you must discard a card when you cast it.  Big Score has seen a lot of play in Izzet decks that want to move quickly through the deck to access its best cards.  The added mana from the treasure tokens helps the deck get to its best spells.

Strangle is a one-drop removal spell.  For one mana you do three damage to a creature or planeswalker.  The fact that it is at sorcery speed has limited its ability to impact a game, but it does see play in decks that do not care that Strangle is not at instant speed.

The set had potential, but Devilish Valet, Goldhound, Jaxis, the Troublemaker, Professional Face Breaker, Riveteers Requisitioner, and Unlucky Witness were not enough to revitalize Mono-Red.

Devilish Valet is one of the most interesting cards from Streets of New Capenna.  For three mana, you get a 1/3 devil warrior with trample, haste, and alliance.  Devilish Valet’s alliance ability doubles Devilish Valet’s power until the end of turn when a creature enters the battlefield under your control.  The potential to have a game-ending attack made Devilish Valet an interesting build-around card.  When you combined it with cards that create token creatures it had great potential, but the inconsistency of the deck made it difficult to pull off the combos needed to make Devilish Valet work.

Goldhound is a one mana artifact creature treasure dog with first strike and menace.  The combination of abilities makes Goldhound an interesting option, but that has not been enough to find a home in standard.  Jaxis is a legendary 2/3 human warrior.  Jaxis has the ability to discard a card and create a copy of another target creature you control.  It gains haste and when this creature dies, draw a card.  Sacrifice it at the beginning of the next end step.  The fact that it can only be activated as a sorcery limited its ability to have an impact on the game.

Like Jaxis, Professional Face-Breaker had the potential to play a role in a red deck.  For three mana, Professional-Face Breaker is a 2/3 human warrior with menace.  Its ability to create a treasure token whenever one or more creatures deal combat damage to a player makes it an interesting option.  Then you can sacrifice a treasure to exile the top card of your library and can play that card this turn.  The limited ability to use the card exiled by the sacrifice of the treasure token made Professional Face-Breaker of limited value compared to other options.

Riveteers Requisitioner has seen play as an early threat that creates a treasure token when it dies.  For two mana, you get a 3/1 viashino rogue with blitz.  Its ability to create the treasure token has led to it seeing play in Jund and other decks to ramp into larger spells.

Bootleggers’ Stash’s ability to turn your lands into treasure token creators has made it a quality card in commander.

Courier’s Briefcase is an artifact treasure that creates a 1/1 green and white citizen creature token when it enters the battlefield.  Then you can later sacrifice Courier’s Briefcase to add a mana of any color or you can pay a mana of each color to draw three cards.  It sees play in decks that have access to all five colors of mana.

Fight Rigging is an enchantment with hideaway 5.  For three mana, this enchantment gives a creature at the beginning of combat a +1/+1 counter.  Then if you have a creature with 7 or more power you may play the exiled card without paying its mana cost.  Getting the hideaway ability to activate is the key to the card, so it has seen limited play in competitive decks.

Gala Greeters is a great card because of its abilities.  It sees play in a variety of decks.

Jewel Thief is a fine green three-drop.  Jewel Thief creates a treasure token when it enters the battlefield and gives you a 3/3 cat rogue with vigilance and trample.  It works well when you pair it with Gala Greeters to ramp out big threats.

Prizefight has one of your creatures fight one of your opponent’s creatures and creates a treasure token for you.  Better options have limited its play.

Topiary Stomper is a three mana spell that gives you a 4/4 plant dinosaur with vigilance and when it enters the battlefield you get to search your library for a basic land that you put on the battlefield.  Topiary Stomper’s ramping ability makes it a good value card, but the fact that you can’t attack or block with it unless you control seven or more lands has limited its playability.

Like other cards from the set, the high cost of Vivian on the Hunt has limited its play in standard.  If Vivian cost four or five mana she would be played much more because her ability to get creatures onto the battlefield and creature cards into your hand.

Streets of New Capenna is at its best when you look at the quality multi-color cards from the set.

Black Market Tycoon is a mana source on a body, but the downside of the card, it deals two damage to you for each treasure you control on your upkeep, has kept it from seeing more play.

Evelyn, the Covetous was a key piece of the Grixis Vampire deck.  Her ability to exile cards and give you the ability to play them later made Evelyn a great card in the mid-game that would flash into play to block an attacker and exile cards to play later.  The high quality of cards from Dominaria United and the Brother’s War has pushed Evelyn to the sidelines.

Fleetfoot Dancer is a powerful four drop in Naya colors.  This 4/4 elf druid has trample, lifelink, and haste.  Fleetfoot Dancer’s drawback is that it is not a human.  Naya Humans has been the preferred version of Naya.  Despite that it continues to see play.  Given its abilities, I would not be surprised if a deck develops around Fleetfoot Dancer in the future.

Jetmir, Nexus of Revels is a legendary 5/4 cat demon in Naya colors that grows your creatures as the number of creatures on your side increases.  A Jetmir tokens deck has seen play with Jinnie Fay, Jetmir’s Second and Gala Greeters.  Gala Greeters creates a treasure token that Jinnie Fay turns into a creature.  The power level of other decks has limited the playability of the deck, but as we get more standard sets it might have a chance to be revitalized.

Lagrella, the Magpie is a legendary human soldier that gets to exile any number of other target creatures controlled by different players until Lagrella leaves the battlefield.  This is a powerful ability, but because Lagrella is only a 2/3 and the downside of the creatures returning to play getting two +1/+1 counters on them has limited her playability.

Maestros Charm sees play mostly for its ability to deal five damage to a target creature or planeswalker.

The most hyped card from the Streets of New Capenna was Ob Nixilis, the Adversary.  While Ob Nixilis sees play it has not impacted standard or other formats as much as some thought it would.

Obscura Interceptor continues to see play in the Esper Raffine deck as a sideboard card.  Its ability to return a target spell to its owner’s hand has made it a counterspell with a body that many times has the effect of preventing your opponent from playing a spell the turn your cast it.

Riveteers Charm is a flexible spell that usually will require your opponent to sacrifice the creature or planeswalker with the highest mana value.  Its other abilities will see occasional use, but the removal piece has made it a part of the Jund deck in standard.

Tainted Indulgence continues to see play as a draw spell in Dimir colors.  Having to discard a card unless you have five cards with different mana values limits its play because of the quality of blue draw spells.

Toluz, Clever Conductor occasionally sees play in the Esper Raffine deck because Toluz exiles cards that are discarded rather than putting them into the graveyard.  Then when Toluz dies you get to put the cards exiled with it into their owner’s hand.  The power-packed creatures of the Esper Raffine deck has limited Toluz to only a copy when it sees play.

Unleash the Inferno sees play in Jund decks as a powerful removal spell.  It gets to deal seven damage to a creature or planeswalker.  This kills almost every creature in the format.  The upside of getting to destroy an enchantment or artifact that an opponent controls that has mana value equal to or less than the amount of excess damage can turn the spell into a two-for-one removal spell.

Void Rend does everything you want a removal spell to do.  It can destroy any nonland permanent and can’t be countered.  It will continue to see play in the Esper Raffine deck.

The tri-lands of Streets of New Capenna will have an impact on standard for as long as they are legal.  They have made it possible to have three color decks consistently be able to play the best cards in a deck.

That’s it for this week.  I’ll see you next time.