A Look Back at Kamigawa: Neon Dynasty

A Look Back at Kamigawa: Neon Dynasty 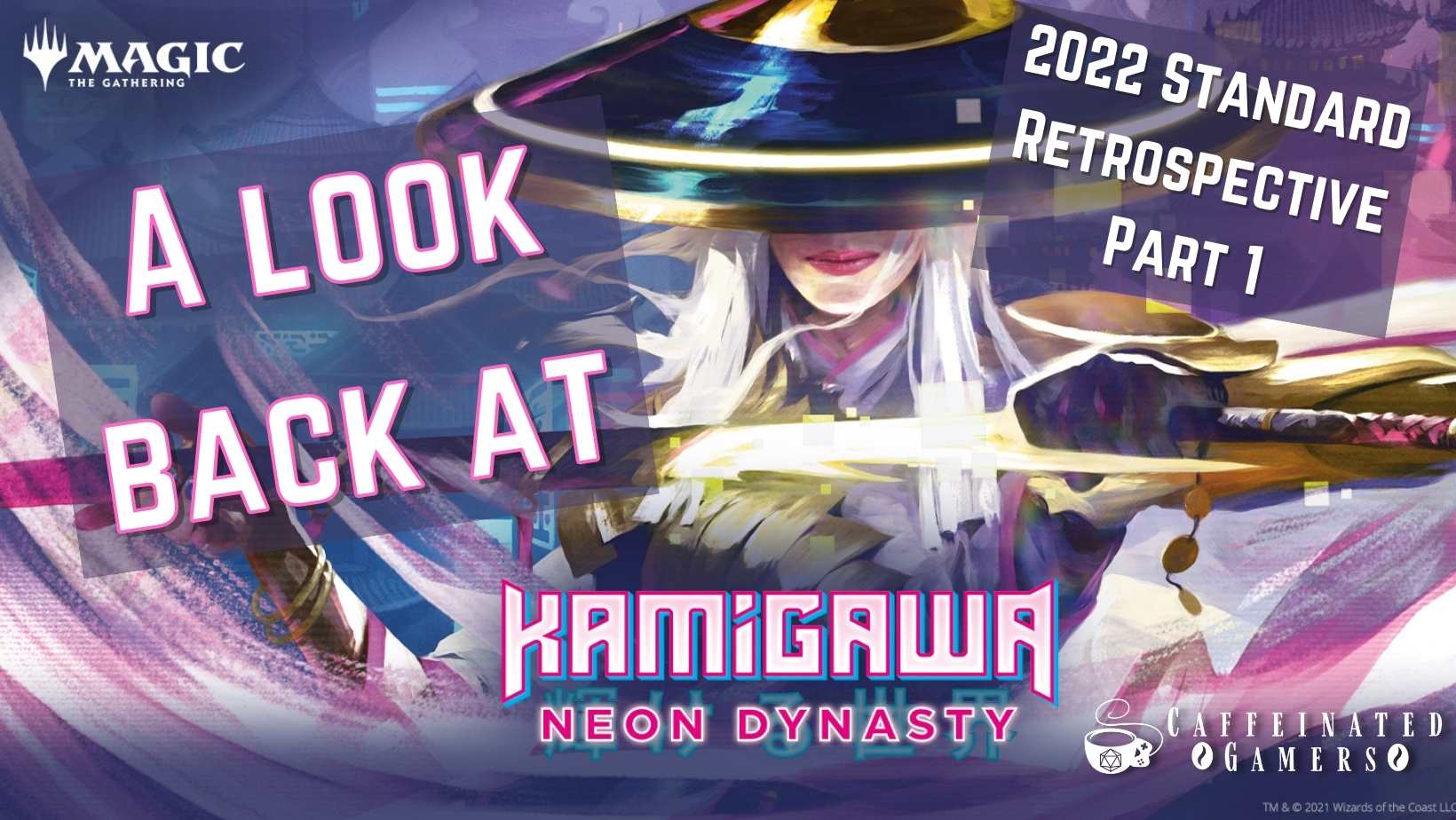 With a little less than two weeks until Christmas, it’s time to look back at the year that was in standard.  Over the next three weeks, I will look at the cards from the first three standard legal sets from 2022.  This week I will look at the most impactful cards and a few of the decks that developed from Kamigawa: Neon Dynasty.

The Top 5 most impactful cards from Kamigawa: Neon Dynasty

Other cards that had a significant impact:

White provided players with a diverse group of cards that continue to see play in standard and in other formats.  Ao, the Dawn Sky turned out to be the best dragon from Kamigawa.  Its ability to dig for creatures when it dies makes it a card that adds value when it leaves play.  Spirited Companion sees play in a wide variety of decks because of its ability to draw a card when it enters play.

White offers some of the best removal in standard.  Farewell is the best board wipe in standard.  The ability to exile all artifacts, creatures, enchantments, and graveyards turns around games.  March of Otherworldly Light and Banishing Slash allow you to exile a creature, artifact, or enchantment.  While Touch the Spirit Realm allows you to exile a creature or artifact.  Few sets of the level of quality removal that Kamigawa does in white.

Blue had a lot of potential but turned out to not offer much.  The best card in blue is March of Swirling Mist.  For a blue and X mana you get to phase out a creature for each mana spent.  It became a key piece in the Hinata, Dawn-Crowned deck.

Invoke the Winds allows you to take control of an opponent’s creature but has only seen sideboard play.  Jin Gitaxias, Progress Tyrant is a good card, but the high cost limited it to a bit player.  Finally, Spell Pierce is a quality reprint that sees play in control decks.

Junji, the Midnight Sky sees play most often in sideboards.  It gives black a good flyer against decks that have many small creatures on the board.  Finally, Virus Beetle makes an opponent discard a card which several decks used to create card advantage early in games.

Thundering Raiju continues to see play.  Raiju’s ability to give a +1/+1 counter each combat and do one point of damage for each modified creature provides good value.  The Boros Aggro deck that was popular over the summer used Thundering Raiju as its finisher.  The other creature from Kamigawa to see play is Atsushi, the Blazing Sky.  Like Ao, Atsushi has a good death trigger that keeps a deck going in the mid-game.  Most of the time, getting access to two cards that you can play until the end of your next turn provided good value.

Kumano Faces Kakkazan is a one mana saga.  It proves a point of damage, a +1/+1 countered to a creature, and a 2/2 creature.  This card sees play in standard and pioneer.  I would not be surprised to see Kumano Faces Kakkazan played well after it rotates out of standard.

Green provided many of the creatures that make up the core of the Selesnya Enchantments deck.  Generous Visitor allows you to put a +1/+1 on a creature each time you cast an enchantment spell.  Kami of Transience grows itself when an enchantment is played.  Some versions of Spirits use Weaver of Harmony as an enchantment creature lord.

Shigeki, Jukai Visionary has played a role in midrange and control decks.  Shigeki’s ability ramp will continue making it an inclusion in these types of decks.

Invoke the Ancients provided Mono-Green decks with two large threats that could close out games.  The flexible abilities of the tokens allowed them to adapt to the board state.

Finally, Commune with Spirits gave the enchantments deck card selection and Tamiyo’s Safekeeping continues to provide protection for a permanent in play.

Greasefang, Okiba Boss became an instant hit in Pioneer with a deck forming around the card.  The Kami War continues to see play in five color control decks.  The flexible mana that Streets of New Capenna provided made it possible to consistently play the Kami War.  Hinata, Dawn-Crowned and Oni-Cult Anvil became the centerpiece of its own deck.

The most impactful cards from Kamigawa: Neon Dynasty on Magic were the channel lands.  Boseiju, Who Endures ranks as the most impactful card from the set.  A land that can channel for one or two mana to destroy an artifact, enchantment, or nonbasic land has a place in nearly every format all the way back to Legacy.

Eiganjo, Seat of the Empire, and Takenuma, Abandoned Mire have had the most notable impact on standard.  Each card sees play in a variety of decks to serve as removal in the case of Eiganjo and card advantage in the case of Abandoned Mire.  Having tools in your mana base to affect the overall game always feels good.

Standard decks developed around enchantments, Hinata, Dawn-Crowned, and Oni-Cult Anvil highlighting the sets impact.  Each of these decks had a time near or at the top of the standard tier rankings through rotation.

The enchantments deck combined the great cards from Kamigawa: Jukai Naturalist, Kami of Transience, Generous Visitor, and Mishiko’s Reign of Truth with Runeforge Champion and the rune cards from Kaldheim to draw cards and play spells for close to free.  When the deck got rolling, it was difficult to slow down.

Jeskai Hinata proved to be the top deck of the summer of 2022.  Hinata is my personal favorite card from the set.  Hinata, Dawn-Crowned ‘s ability to reduce the cost of spells by one mana for each target allowed players to use the powerful spell Magma Opus from Strixhaven: School of Mages to take over games.  Even though Magma Opus costs eight mana, it was easy to reduce that cost to only two mana.  It particularly did well when you played Magma Opus during an opponent’s upkeep to disrupt their turn.  The other powerful tool in the deck was March of Swirling Mist.  Hinata’s ability reduced the cost to one blue mana and allowed you to phase out all the creatures in play.  This typically left an open board to attack into.

Finally, Oni-Cult Anvil revitalized Rakdos Sacrifice.  Oni-Cult Anvil provides recurring value and sacrifice outlets.  When an artifact leaves play during your turn, you get to create a 1/1 Construct creature token.  Then you can tap Oni-Cult Anvil and sacrifice an artifact to gain a life and have your opponent lose a life.  Anvil works well with cards from Innistrad that create blood tokens like Bloodtithe Harvester and Voldaren Epicure.  The addition of Ob Nixilis, the Adversary pushed the deck into a top-tier deck.  While the deck has lost popularity, it remains a quality option in the metagame.

Kamigawa: Neon Dynasty was a fantastic set that added a lot to standard.  The success of the set hopefully will mean a return to Kamigawa in a few years because there is a lot of space to continue the development of the plane.

That’s it for this week.  Next week I will revisit The Streets of New Capenna.